By Michael
A while ago during a concert of Tristania and Dark Tranquillity, I got into contact with the guys and girls behind Karmaflow. Back then the project was just starting, but on this evening I went to see the premiere of Karmaflow in Concert: The Rock Opera. 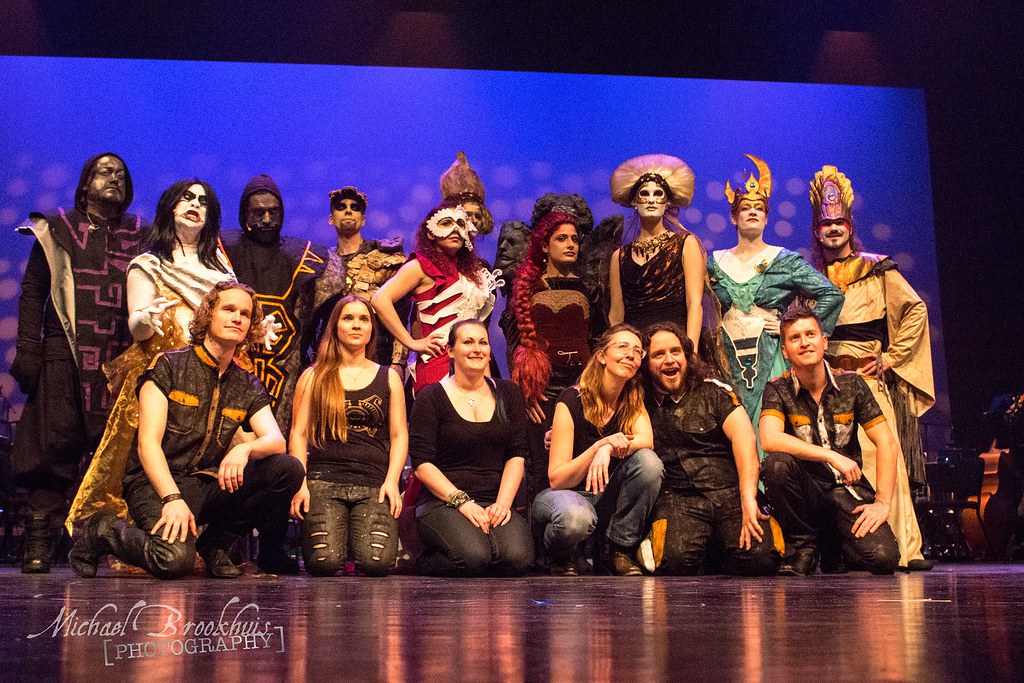 Karmaflow is an ambitious project of a few (former, they graduated) students from the University of Arts in Utrecht, The Netherlands. It consists of a couple of branches. First off, there is Karmaflow: The Rock Opera Videogame. This is a story based game in which the player can enjoy the story through music and songs. The reason this project caught my attention, is that some of my favourite musicians participate in it.

The second part is the theater show I went to tonight. Not only did Ivo van Dijk manage to form a band together and play a regular show, he also got some of the artists who participated in the video game on stage and added a full orchestra. Ivo, mastermind behind this whole project and previously member of the band Xystus, played the drums this evening. The next installment is the release of the second part of the game and the release of the album. Maybe in the future there will be more shows.

Thus far a little bit of the background story. Back to the show of the evening. At first the amazing Metropole Orchestra started playing, after which Dianne van Giersbergen (Xandria) came on stage to act out her role as The Narrator. Her voice made it sound like we were about to watch an opera. Although this made it hard to follow the first part of the story, the combination of her voice, the orchestra and the band gave me the first set of goosebumps during the evening. 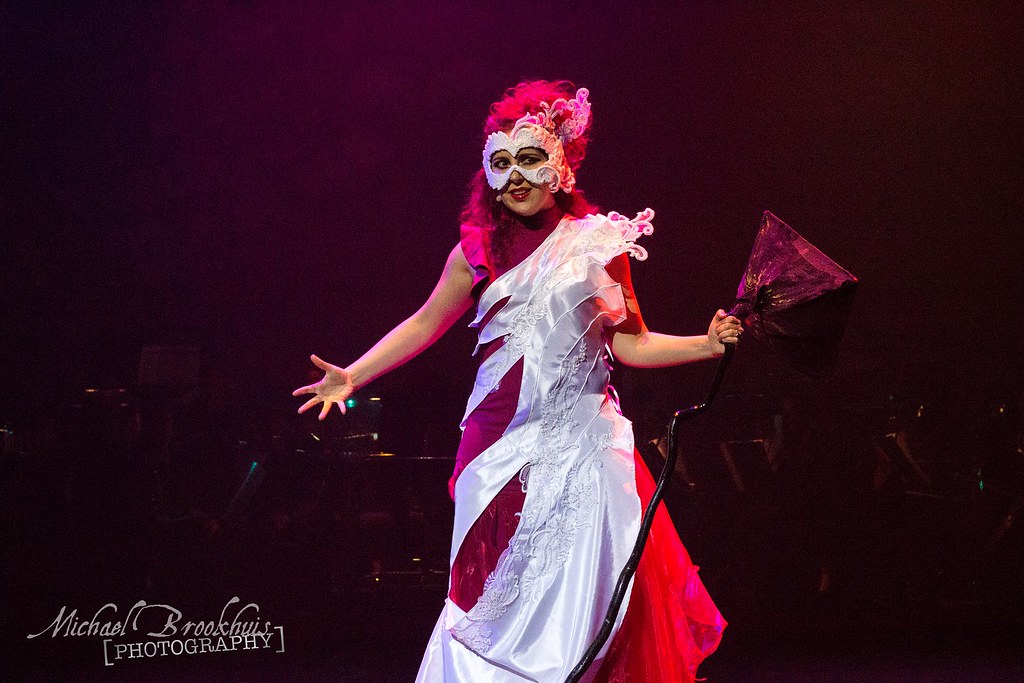 George Oosthoek (ex-Orphanage) and Marcela Bovio (Stream of Passion) followed to act out their roles as The Banshee and The Muse. Next to them was Bas Dolmans (Xystus) who did an awesome job as The Conductor. During this part the story was easier to follow and this also introduced us to the interactiveness of this play.

Before the show we could download a Karmaflow app. This tells a little bit of the background story, but it also has a theater mode. In this mode, the app followed the progression of the show and at certain moments we were able to make a choice on screen. By selecting one of the two choices, the audience was able to steer the show into a direction. The actors on stage got a signal on which way to proceed and had to sing those parts. To me, the app is an innovative piece of interaction between audience and play, yet it still has a lot of room for improvement.

The app did not work on a lot people’s of devices and we did not really know at what point we were about to get an option to choose. This way we had to focus on the app as well as the screenplay, which meant that with our devided attention we missed out of some parts of the show. It would have been better to have the app also shown on the background of the stage, so people could follow that as well. That way it could direct us towards the app when a choice had to be made. Also, to me it wasn’t really clear what effect my choices had on the story. This might improve if you have played the game and know the music, but I think a lot of people will go to this show blank. Still, it’s a cool way to get the crowd involved into the show. 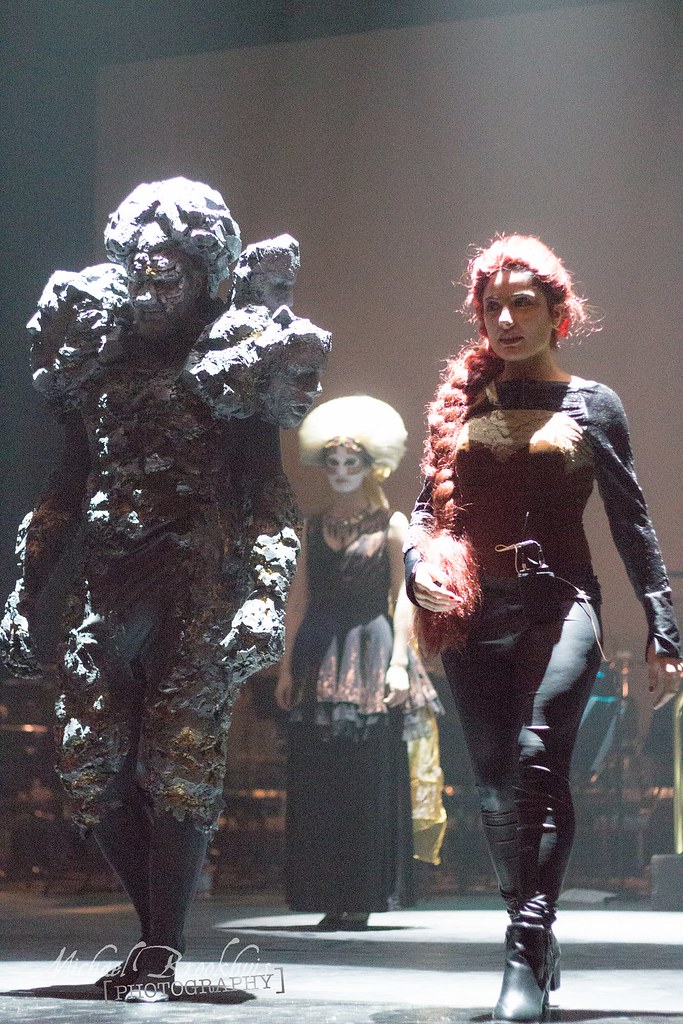 We countinued our journey to the desert sands, in which Mariangela Demurtas (Tristania) had a role as Shaman. Later she would have another role, as The Bird Goddess. These two roles fit her type of singing really well. For the people who know the trailer of Karmaflow, you can see The Bird Goddess in there.

As the story continued, more new characters were introduced, but some singers also had multiple characters to play. Henning Basse (MaYan) and Daniel de Jongh (Textures) did a great job on stage as The Hero and The Heart. Naturally, they are not schooled actors, but they did try their best to live up to their role. Their voices blended together in that scene as well. The same goes for Arjen Janissen and Michelle Splietelhof. Michelle did seem to struggle with some notes though.

Naturally there were a lot more people involved. Lisette van den Berg (Scarlet Stories) and Jesper de Kruyff (Purest of Pain) had their roles as the Data Chamber and the Guide. But that’s not all. The Metropole Orchestra did an amazing job to deliver the moodsetting to new hights. To me, there is something special about a band playing with a big orchestra. Talking about the band, as said Ivo himself sat behind the drums, but besides him stood Bob Wijtsma (Xystus) and Carmen Raats on guitars, as well as Luuk van Gerven (ex-After Forever) on bass. They all played with huge smiles on their faces. What an experience it must have been for them.

After the show, the audience gave a standing applause, before making their way to the afterparty. I must give all parties involved my compliments. The musical compositions are well done, reminding me a bit of “The Human Equation” by Ayreon. The sound on stage was great as was the lighting. Sure, there were some improvements to be made, but for a small team to make this happen is an accomplishment itself. Karmaflow has become bigger than they would have anticipated and I hope to see more shows, perhaps with a different line up. Who knows what the future brings!