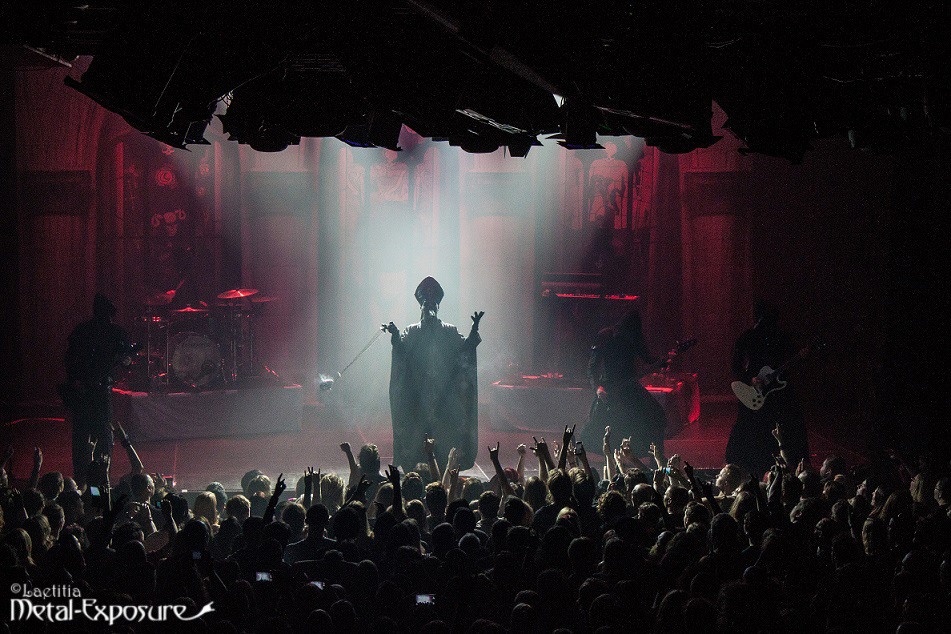 By Laetitia
After the Swedish ghouls of the heavy metalband Ghost performed fine rites at the Dutch festivals Fortarock and Pinkpop, it was time for a clubshow in de Melkweg: more playing time, a more intense atmosphere, more Ghost. On this ordinary Monday evening, the venue was packed with fans who got were treated with just that.

While walking into the clammy venue, the vague scent of incense could slowly be discerned from odour of warm bodies. The stage was, of course, decorated as a cathedral. As soon as the lights were turned off, the chants and sounds of Masked Ball and Infestissumam intensified in volume and the nameless ghouls took the stage, the audience started cheering and clapping loudly, already giving an indication of the rest of the night.

You’d think that wearing hooded robes and a papal robe would somewhat confine the movements of the musicians and the vocalist. However, from the first song on, Per Aspera ad Inferi, it showed that even with long garments and no head banging, the Swedes could easily outdo other (metal)bands in terms of performance. They used the stage area to walk around and played their instruments like their souls had been taken over by the devil. The actions Papa Emeritus II partially depended on the interaction with the audience, by shaking their hands in the same demure manner as Pope Francis would do.

The setlist contained Ghost classics, to which the crowd loudly sang along, as for example during If You Have Ghost, Monstrance Clock and Ghuleh – Zombie Queen (during the encore). All in all, the show of Ghost in Amsterdam was excellent, and let’s hope that another papal visit is in the works soon.