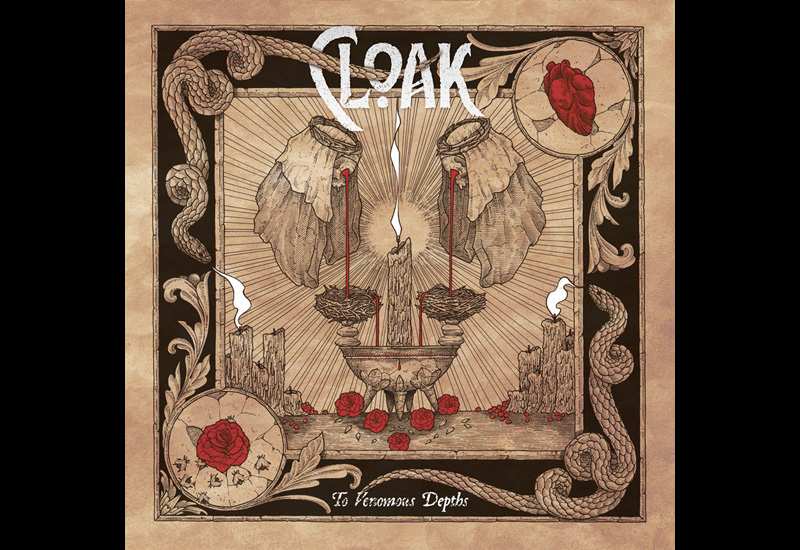 A Cloak is many things – something to keep you warm, to keep you dry or just something to make you look like a genuine bad-ass. Arguably, Klingons being able to cloak their massive war-spaceships, were always much cooler than the diplomacy driven Federation non-descripts on their toothless pleasure yachts. And friend, foe or a bit of both, it was never directly clear what could be expected from these marauding space Vikings. What is underneath, what resides in the Venomous Depths?

Cloak (Atlanta, Georgia) is a four piece from the US of A, that will release their debut full length on the 10th of November (Season of Mist). By stating influence from Fields of the Nephelim, Deep Purple as well as Dissection they should pique the interest, while simultaneously raising the questioning eye-brow. How indeed can one make coherent music with all three genres in one, without ending up in some exaggerated, self-toppling piece?

The answer, is, unequivocally, given in the guitar compositions of Cloak. The laid back groove set out by the bass lines, underpinned by the commanding yet ever dynamic drumming is so beautifully finished and elaborated with the guitars, that finding equal or similar artists within ‘regular’ (if there is such a thing) heavy metal is quite a challenge.

Tribulation however, does come to mind as the only band on-par and similar sounding to Cloak. Here the similarities are also more than just the guitar, as vocal style and laid-back bass groove emphasis can also be compared. The vocals are however more organic, less hissy, richer and thereby more pleasing to the ears of yours truly. The use of rock (or by Gods high and low, pop, although very well applied) rhythms is can also be found here and there.

Perhaps the best thing about the album is the overall experience one has when listening. From the first notes of piano led opener To Venomous Depth Where No Light Shines, the listener is pleased, captured and enraptured with the music of the album. And with each song, the album progresses further in an expansive, groovy world of tight-as hell riffing, sound scaping and just awesomely well played heavy-metal-black-rock (it’s way too groovy and uplifting at times to be called occult rock i.m.o.).

Naming highlights of Depths is a challenge likewise, as the album is an integral experience, not really needing to be ‘dissected’ (yes, you saw what I did there) into separate songs. However, Beyond the Veil does stand out for the bewitching sequence of riff-rhythm-bass-solo work, each item weighed and proportioned exactly to perfect merit, yet never becoming forced or sterile. Death Posture yours truly would nominate for the best solo(s) of this album, although that is by no means saying that the guitar solos on other songs are not great.

The albums’ dramatic apotheosis, Deep Red (clo(a)cking well over 10 minutes) closes book on the round trip exploring what resided beneath the Cloak, was hidden behind the Veil and in crawling in the Depths. A book that can be read again and again, as the passages may be familiar, but somehow always feel fresh and different. Even upon hearing them repeatedly. This debut album betrays a quality and talent not often seen in a band. They manage to pull away from proven formulas and same-ol’ constructions to carve out their own creation. This is much welcomed in the heavy-metallesque-o-sphere, that is showing distinct signs of the need to re-invent itself. Cloak has unveiled itself to do just that.

1. To Venomous Depths/Where No Light Shines
2. Within the Timeless Black
3. The Hunger
4. Beyond the Veil
5. Death Posture
6. In the Darkness, the Path
7. Forever Burned
8. Passage
9. Deep Red