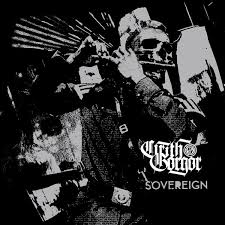 Ever since the middle of the nineties Cirith Gorgor has led a crusade with its aggressive yet melodic terror. There are a lot of black metal bands around but this band manages to enthrall me with their superb quality for a long, long time. I am grateful this band is still around and has gained quite a large discography. Although their sound, probably due to line-up changes, has slightly changed during the years it has never compromised in quality. Now after the highly appraised Visions Of Exalted Lucifer and excellent EP Bi Den Dode Hant it is now time for Sovereign. Once again it put a spell on your ears although their sound has changed somewhat.

Despite these changes Cirith Gorgor is luckily not straying too far from their path too. Treating us upon a well-executed dose of straight forward aggression Sovereign starts with “Funeral March for A Modern Man”. This opener track can be seen as a near perfect interlude of what to come. After that all hell breaks loose with “Hellbound”. A pretty straight forward song with a perfect dose of aggression. Please note the subtle keyboards in the background which only enhances its sinister atmosphere.

Title track “Sovereign” and “Luciferian Deathsquad” remind me a lot of later art of Enthroned without losing their own sound. You can regard this as a big compliment. Although the typical melodic guitar lines which we are used to are pushed back in the background there is enough space for some dark melodies which can be heard in the later part of “Deathcult” and “Manifestation of Evil”. Here you can hear the old sound intertwined with a more modern and straight forward approach.

Satanael still has a great and powerful voice. His screams, words, murmurs and shouts are still a force to be reckoned with. Together with the tight drumming and chants of Levithmong , excellent, powerful and accurate(bass)guitar play, Sovereign is a demonic force not to be underestimated. It took me a few spins since the sound has a slight different approach in comparison with its predecessors. It sounds both familiar and as a new acquaintance with this band at the same time. Once used to this Sovereign is a powerful, thrilling and intriguing ride until the end. With great production and nine excellent tracks Cirith Gorgor once again proves to be a rightful contender for the (Dutch) black metal throne. Check Sovereign out and go see this band live! It is most definitely worth it.