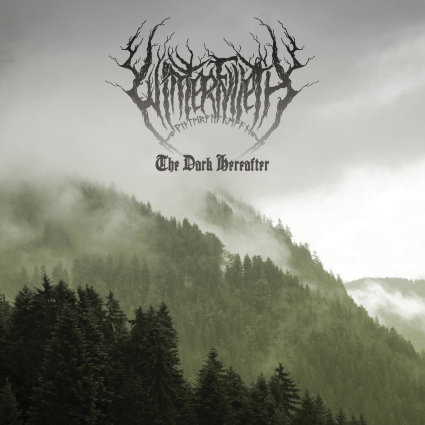 By Wouter B.
Although summer is not dying any time soon, with 30+ degrees C in the middle of September, autumn is being heralded by it’s proverbial namesake and atmospheric/black metal entourage Winterfylleth. I for one am definitely waiting for less sun, less heat and some (more!) of The Dark Hereafter.

Winterfylleth, a name that rings magic for me ever since I got to know them. The name translates as ‘October’ (or Autumn) in old English, which neatly covers their lyrical themes and music in one word: heavy, atmospheric and black-as-a-rotting-moor, yet colorful and melodic. The music has an unrelenting focus on ‘ye Olde England’ and its (romanticized) historic vistas. Since hearing their 2010 release The Mercian Sphere, they have release the magnificent Threnody of Triumph (2012) and The Divination of Antiquity (2014). Their new release, The Dark Hereafter will be released September 30th, 2016.

Winterfylleths’ music is comparable to their (split-up) brothers in arms Wodensthrone, while some of their gloomier songs can be reminiscent of Wolves in the Throneroom. Strectched melodies, fast paced lead-riffing and laid-back yet fast-as-hell drumming. And, much more to my personal taste: not lo-fi, as seems to be the (unwritten) law in some parts of black-metal universe.

The opening track The Dark Hereafter is undeniably a very typical Winterfylleth song: Aggressive and pummeling, with fast riffing and mid-paced vocals, supported by the trade-mark laid-back but tight blast beat. After hearing it a couple of times, it becomes clear this song also heralds the dark and brooding atmosphere of this album. Especially when compared their lighter, more diverse and melodic previous release, Divination of Antiquity. Where Divination was a bit of a ‘hit-and-miss’ mixture compared to Threnody, the direction of this release is much clearer: We are heading into the darkness hereafter.

That much is also clear from the Green Cathedral, which deals with a death rite seen through the eyes of the diseased. A very heavy, laden composition fit for a soul unbound leaving this world. The magnum opus of this album, although it could have done with a bit more songs before closing the album.

The romantic and melodic overlay is not neglected, as on Ensigns of Victory, with its pattern of melodic guitar weavings. The song is my personal favorite of the album, for its dualistic feeling; brooding, heavy yet free. The proverbial (en)signs of victory can also be scars indicating your still a free man?

To my extreme delight, the albums final closer ‘Lead Astray in the Forest Dark’ opens with one of the most characteristic drum and guitar riffing known to black metalkind: Ulvers’ I Troldskog Faren Vild. Pleasing to listen to given the English paraphrasing and interpretation of the Norwegian lyrics, and definitely less lo-fi compared the original.

The Dark Hereafter is fantastic, but has one (literal) short-coming: it’s playing length. Not counting the last song, the album clocks just 33 minutes. Don’t get me wrong: it’s still a great album. It just leaves a gap, yearning to be filled with more!