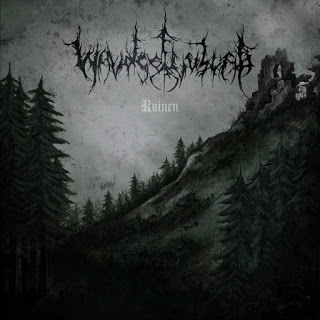 By Sam
Even with the plethora of sub-genres that exist in metal these days, I still occasionally feel like we’re missing a category. I’d be tempted to call it “romantic black metal,” but that calls to mind images of corpse-painted ghouls singing love ballads. I mean “romantic” in the sense of the 19th-century literary movement; maybe it would be more apt to call it something like “handsome-long-haired-dudes-screaming-in-German-about-trees-and-sadness” black metal? I guess that’s not really accurate either, because some of the dudes actually have short hair, and sometimes they’re screaming about mountains instead of trees. But you get the idea. They’re the heirs to the legacy of the German romantic poets, crafting verse rooted in the veneration of nature, admiration for the eternal wanderer, and an overwhelming sense that the modern world is just too damn much.

With three full-length albums already under their belt, Waldgeflüster could certainly be considered one of the more established bands in this imaginary genre, and this brand of tree-worshipping, raw-throated music is, generally speaking, my jam. Yet oddly, when I was asked to review the band’s fourth release, Ruinen, I discovered that of all the myriad bands whose names start with “Wald,” Waldgeflüster were one of the few that I’d never gotten around to listening to before. I suspected I had been missing something highly relevant to my interests, so I immediately put Ruinen on constant loop at home – while I worked, while I cleaned, while I sat and stared vacantly at the wall. For weeks. And even though there were a moments where my ears pricked up (during the breakdown about a third of the way through “Trümmerfestung,” for instance, or the haunting outro to “Und immer wieder Schnee”), I still couldn’t really get a handle on the album.

It wasn’t until I headed outside and hiked through the local fields for two hours on a windy autumn afternoon with the music in my ears that it finally started to make sense. Ruinen isn’t the sort of work that can be properly assessed while sitting at a desk or sprawled out on the couch; it has to be felt, and that requires the right setting. What my outdoor listening experience unlocked, and what I couldn’t discern from within the comfort of my own four walls, is the concentrated dose of “Herbststimmung” that this album delivers – that feeling you get on the first really crisp days of fall, when the air smells like wood smoke and leaves your face cold to the touch after an hour outside. Unlike Waldgeflüster’s previous LP, Meine Fesseln – which I explored later on and thought was excellent for other reasons – Ruinen feels like a well-rounded whole with a rich, full mix, consistently maintaining that autumnal atmosphere from beginning to end.

Once you tap into that feeling, the beauty of the whole thing unfurls in front of you in all its gray and crimson glory. Waldgeflüster do an excellent job of balancing brutal black metal elements with gentle melodies and acoustic passages, including some gorgeous strings performed by John Becker of Vaskula and Austaras. The band also recruited two personal favorites of mine to provide guest vocals: Helge Stang of Wolves Den (on “Und immer wieder Schnee”) and Seuche of Fäulnis (on “Graustufen Novembertage”), both of whom are gifted modern-day poets in their own right. And this brings me to the aspect of Ruinen I love most: the lyrics. Unlike some of their fellow long-haired German tree-screamers, Waldgeflüster manage to avoid many of the clichés and platitudes that are prevalent in this genre. There’s a rare sincerity and sophistication to their verse that shines through even at moments when the music veers a little too sharply toward pathos for my taste (during the clean vocal passages in “Ruinenfelder” and “Trümmerfestung,” for example). As someone who fell in love with the German language 15 years ago, I am always immensely grateful to discover artists like Waldgeflüster who pick up right where the 19th-century romantics left off. The lyrics to this album could stand alone as pure poetry, if you ask me – but the music is obviously an enormous bonus. If Hölderlin and von Eichendorff came back from the dead tomorrow, I suspect they would be pretty proud of the poems their progeny are putting out nowadays (even if they might be a little confused by all the screaming).

So: If you’re the sort of person who loves melancholy, fall weather, screaming, and old-school German poetry, spend some time perusing the lyrics to Ruinen, put on a cozy sweater and some hiking boots, and take this album out into the great outdoors to experience that Herbststimmung for yourself.