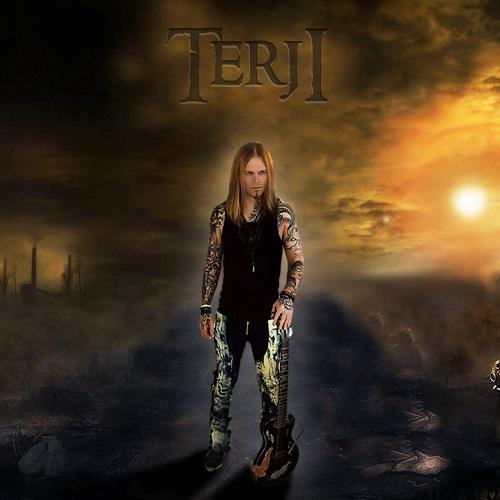 By Laetitia
Any folk metal fanatic is familiar with the reigning kings of the Faroe Islands: TYR. Perhaps lesser known is the self titled solo-album of the band’s guitarist Terji Skibenæs, released in February 2016 by Independent Faroese label TUTL. As a dedicated folk metal fan in my formative metal years, not averse to instrumental records, and an amateur guitar hero (and I do not mean on the Nintento Wii), I found myself curious to see what kind of record TYR’s guitar maestro Skibenæs had created.

Unlike what you might expect, this album does not feature any folk metal influences, as Skibenæs claimed in an interview, he does not listen to the style himself. What do you hear on this effort? A more ‘classical’ metal focused record that journeys through a diversity in styles: from atmospheric tunes to sweeping power metal and every now and then full on, forceful riffs. Naturally this gives the guitarist to showcase his abilities more extensively than in TYR and these skills are definitely impressive.

TerjI is a record with two sides to it. A (guitar-driven) instrumental album is by no means accessible to all and it probably takes some sort of fascination for the instrument, a trained ear or being a guitarist to fully appreciate it. While I lean most towards the first, I won’t claim to be either of those three and I will admit that there are moments in which purely instrumental tracks just don’t do the trick. Take the opening song, Time For Change. Terji makes his guitar sing with epicness but the rhythm section and the riffs drag the track down because they sound somewhat generic.

The song Secrets of War proves that the opposite is possible. With a more thrilling and diverse background layer combined with the undeniably fast, screaming and yet melodic leads, it is one of the highlights of the record and it reminds instantly why I do like these types of records: the simple pleasure of hearing a master at work. Another highlight is Layers of Lies, the technicality of the leads with sometimes seemingly simple melodics are enough to blow you away. Even if the underlying music was mediocre (which is not the case) you’d hardly pay attention to it.

All in all, TerjI features a couple of top notch songs, but there are also a few tracks that lack a more exciting foundation. Nevertheless, give it a spin if you are a fan of guitar-driven instrumentals. I’m sure you will enjoy it.