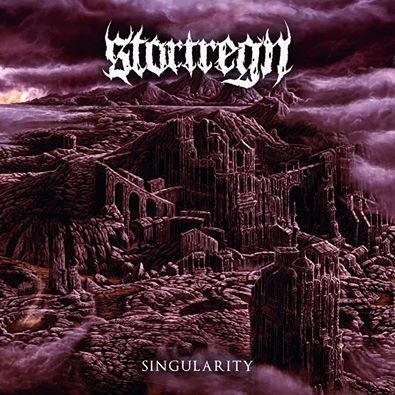 By Wouter B.
From the country that produces both the worlds’ best cuckoo-clocks and chocolate (albeit from pink cows) we present you Stortregn. May 27th 2016 will see their third full length released, Singularity.

When first introduced to the Swiss Stortregn in August 2015, I got pretty much hooked on Evocation of Light (2013). A mix of technical and brutal melo-death metal, with above average in composition and song build. The music is very infective and impossible to sit still at.

Singularity has everything one longs for in a proper melo-death work: a mix of both captivating and brutal riffs, build up and melodic suspense. The vocals, often dual, play well along into this mix with hissing and screaming grunts (yet often well understandable exclamations). The battering drum mixes machine-like gun blast beats with fills and punching march rhythms. Riffing interchanged with both half and full tempo melodies keep things lively – never leaving a dull moment.

A personal highlight of mine on the album is Vertigo, which has a composition masterfully put together. This song has a well-balanced use of (different) vocals, where other songs sometimes suffer from an unstructured vocal(s) overdose. The guitar solo halfway is infective, bringing the ‘Stortregn-effect’ of not sitting still while listening to their music. Another track definitely worth mentioning is Aurora, with one of the best intros and basslines of the album.

The work is sadly recorded with the ‘in-your-face’ mastering in mind, leaving very little dynamic range (at least this promo version). This makes listening to it tiring after a while and is generally a waste of instrument sound. This is for instance audible on Black Moon Silhouette.

While not as infective or as good as I would rate Evocation of Light, I liked the album for its’ “Insomnium-on-steroids” feel. So besides chocolate, cheese, clocks, Eluveitie and Bölzer, we can add Stortregn to the list of highly enjoyable and quality Swiss export products.