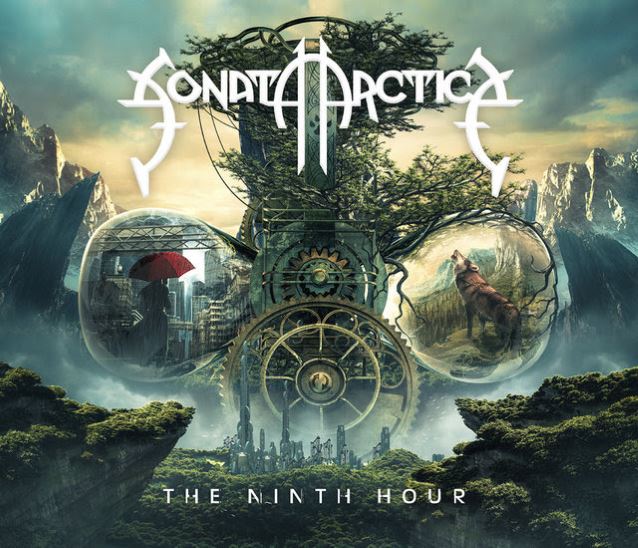 It is only fitting that a ninth studio album is called “The Ninth Hour”, yet for Sonata Arctica, album titles need to fit the cover art and style of the album as well. That is why this title works well with the record, since we as humankind are at the tipping point in our existence, our ninth hour.

The Ninth Hour starts off with a song which is also their first single of the album, Closer to an Animal. Ever since Pariah’s Child, the theme of human destruction and our connection to nature has been more visible in Sonata Arctica tracks. According to lead singer Tony Kakko, this has been happening since he has become a father, a couple of years ago. He tells more about this in the interview I had with him, which you can find here

The second song, also their second single, is a contrast to the first one, lyrically. This symbolises The Ninth Hour theme. On the one hand it’s serious about how we as humans need to take care of our planet and that we are close to destroying our planet. On the other hand we should celebrate life, we are capable of great things. It’s up to us to choose what we do next. The first two songs are catchy as they can be. I’m sure they will be fun to play live and get the crowds to sing along.

The Ninth Hour is an album which ventures into new areas, but also is a great fan pleaser. In Fairytale, Tony sings about political issues, something the band has stayed clear from ever since. The track opens with a nice keyboard solo, combined with a diverse drum track. Overall the drums seem faster again. Tony keeps his singing pace he has had for a few albums now, so don’t expect the heavy fast stuff pre-Unia era. In Fairytale, we do get to hear a nice keyboard-guitar combo and even some sort of grunts.

The pace goes down for the ballad “We Are What We Are”, in which Sonata Arctica gets the help of Troy Donockley on the Overton Low Whistle. In this song, once again we are confronted with the fact on how we treat our planet. The theme fits the song perfectly, making it an emotional ballad.

As stated before, The Ninth Hour is a fan pleaser. We see this in some themes in songs we are all too familiar with. The first one of this, also one of my favourite tracks of the album, is Till Death’s Done Us Apart. In my opinion, this song comes close to the old Sonata, fast drums, melodic riffs, a great story and faster singing. Another fan pleaser would be Among The Shooting Stars, in which we meet a couple of werewolves. This is only the second song from Sonata Arctica that involves werewolves, yet Full Moon has always been iconic.

Rise a Night is a nice, fast track, but somehow does not leave a lasting impression on me, as does Candle Lawns. The song in between, Fly, Navigate, Communicate does. Right from the start, Tony stretches his voice a bit, over a mystical keyboard track.

Best example of fan service is the continuation of a well-known story. We get to hear about the White Pearl again in White Pearl, Black Oceans Part II (By The Grace of The Ocean). This is also the longest track on the record, being just over ten minutes long. In the beginning of the song, the melody sounds strangely familiar, but I still cannot put my finger on it. About halfway through, the well-known piano track of the first rendition of White Pearl, Black Oceans will create a goose bump moment amongst the fans. It sure did for me at least. A beautifully composed track with fast guitars and keys, which both get their solo moments, combined with a great story and emotional slow melodies make this a well-made follow up for the original song.

The Ninth Hour ends with the slow ballad like song On The Faultline and in the standard version of the album, Sonata Arctica placed the Bryan Adams cover Run to You. As a whole, the album sounds more diverse and a little more in track with Pariah’s Child, yet somehow a bit heavier. Sonata Arctica has stepped away from the rollercoaster ride it was on with the previous albums since Unia being all over the place. The Ninth Hour brings back parts of the old Sonata Arctica, yet feeling fresh and renewed. Sailing in new directions, addressing different topics and also being a great fan service with some tracks, The Ninth Hour will please fans old and new.