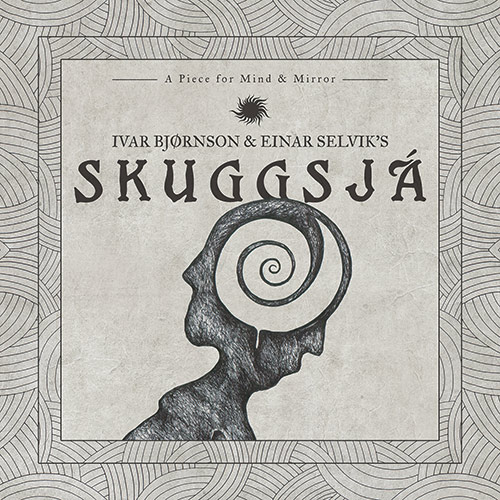 By Laetitia
To describe Ivar Bjørnson’s and and Einar Selvik’s Skuggsjá as the love child of Enslaved and Wardruna, would not merely cover the rich sound scapes that these two musicians have created. This does not only apply to the music, but also to the story behind this project.

‘Skuggsjá’ (“mirror” or “reflection” in the Norse tongue) was originally conceived as a commissioned musical work written by Ivar Bjørnson and Einar Selvik. The arrangement was performed by ENSLAVED and WARDRUNA as a concert piece in commemoration of the 200th anniversary of the Norwegian constitution at the Eidsivablot festival in Eidsvoll, (in a way the precursor of the current Midgardsblot festival), in Norway on September 13th, 2014.

With this in the back of the mind, it is not strange that it feels like this record tells a story. The intro, Ull Kjem, and pieces like Kvervandi at least give off that impression (even if your Norwegian is limited as mine, with a vocabulary existing out of Skål, God dag, vær så god and song titles of tunes of Norwegian extreme metal bands). If you already want to hear the last aforementioned track, check out our premiere!

Even though this debut is not just a combination of Enslaved and Wardruna, you’ll definitely hear the trademark sounds of both of these groups on the record. Take the enthralling title track Skuggsjá, for example. The suspension that you hear throughout the song is constructed by employing traditional instruments and clearly carries the signature of Selvik.

On the other hand you have Makta Og Vanæra, For All Tid, which features the icy guitar riffs of Enslaved and the harsh vocals. This was the only track that needed to grow on me a bit. At first I couldn’t really discover the cohesion since there is so much happening. Once adjusted to that, the song transforms into one of the more unique and rich tracks on the album. Whether or not these songs in particular have of more of a Wardruna or Enslaved sound, you will also notice that the metal elements and traditional music enhance each other and bring the album to a higher level.

The song Vitkispa seems to be the perfect blend: the guitars lay down the ground work and the traditional influences bring more flavour to the sonic landscape. If there is a flaw on Skuggsjá, it might be that the fusion between these music styles could be more outspoken. It is subtle right now, but it would be interesting hear what happens if it is taken to extremes. Nevertheless, this is an album that will speak to fans of both bands and to those of pagan metal in general.

If you’d like to hear Skuggsjá live, don’t miss out on London by Norse and Midgardsblot!