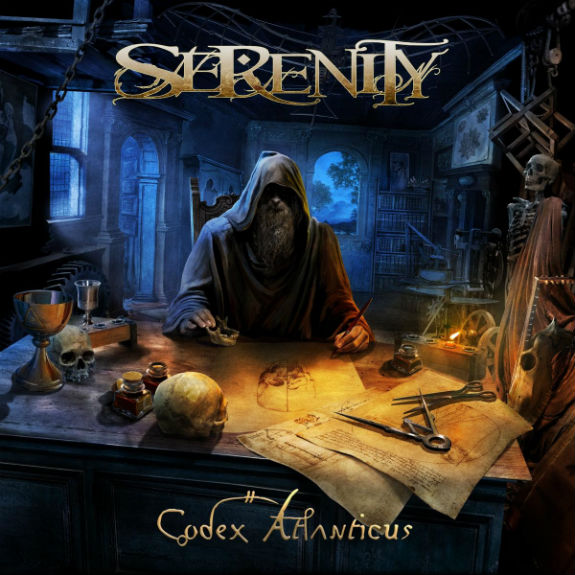 By Michael
Serenity has been a band in motion for the last couple of years. They have been experimenting with their line-up, to keep an steady female vocalist or not. After the band parted ways with Clémentine Ddelauney and guitarist Thomas Buchberger, a new chapter in their story has started. This leads us to the release of Codex Atlanticus.

For who is not familiar with the band, Serenity is a symphonic powermetal band from Austria. Being influenced by historic figures and events, they have written about Marco Polo, Beethoven and Napoleon. All of you who are a bit into history know that Codex Atlanticus is one of the biggest works of Leonardo Da Vinci. In the album, Serenity sings about that, but mostly about the life of the artist.

The intro of the album know just how to set the mood. It brings you back to the time that Da Vinci lives. Right after that, the album kicks off with some great tracks. “Follow Me” is followed by for me the best track of the album. “Sprouts of Terror” was a surprise. The song is faster and heavier than we are used from Serenity, but it’s a great addition to the record. Right after that, “Iniquity” is bombastic and brings back thoughts of “Velatum”.

A song that might not completely fit on the album, is “The Perfect Woman”. Not that the song is bad, far from it. It is very catchy, Queen-like and fun to hear, yet in between the fast songs, it would have been better as a bonus track maybe.

There have been a few guest artists on the album, but to be honest, they were not really needed. Serenity proves with this album that going back to the roots was a wise choice. Georg’s voice is great once again and the composition of the songs is spot on. Apart from a few songs that don’t really fit, the album is catchy and easy to keep listening to.