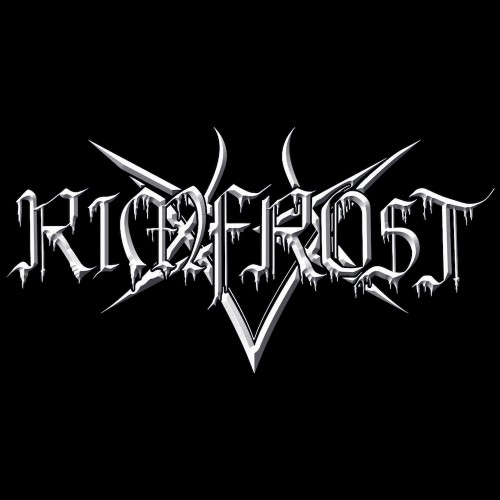 By Laetitia
My first acquaintance with the Swedish black metal formation Rimfrost was when I heard A Frozen World Unknown (2006). Especially the song Freezing Inferno, in all its frostbitten gloriousness, with Hravn’s Abbath-like vocals, whirlwind riffs and the blastbeat spectacle spiked my interest in this group. After the second record Veraldar Nagli (2009) the treacherous northern winds died down around Rimfrost and it wasn’t until the self titled record came out in March this year, that I realized that the Swedes were still active.

Did the pause of about seven years cause much change in the style of Rimfrost? No, not really. The album features the similar black/thrash/death metal, early Immortal infused (now, that has been said and done) songs as before. You can definitely label this band as consistent, boring however, does not come to mind. In comparison to the debut album, the overall atmosphere on this record is a bit more mellow. A Frozen World.. was an outright aggressive blizzard. On this effort, the songs get a bit more space to flesh out (the minimum running time is 4 minutes, up to nearly 10) and the pace has been brought down.

One of the songs that benefits from this approach is Ragnarök. It’s strength lies in the diversity between jiwsaw riffs, catchy, galloping drums and traditional, ice cold northern force. It is one of the highlights on the record, together with tunes like Saga North (slightly more modern infused) and the epic Frostlaid Skies (a true, dense maze of riffage, with an almost Dissectionesque outro).

With this self titled record, Rimfrost has successfully spread the message that they are back. They’ve matured their sound, produced their best record up to date and even managed to shed a bit of the tendency to be compared to Immortal all the time. It’s a good album and I’d recommend it to anyone who is into the genre and hasn’t heard of these guys before.