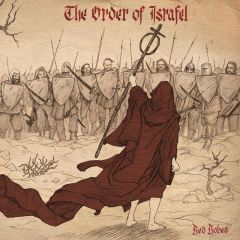 A little more than 1,5 years ago I received The Order Of Israfel their debut album Wisdom. The ‘all-star’ band left a very good impression so I was quite excited when I received their newest album Red Robes a while ago. Already after the first spin I was pretty amazed by it and a few spins later I’m still loving most of the album.

The men of the Order Of Israfel are good at most of what they do, that is: making doom/stoner metal. Like Wisdom, the album has a nice doom feeling, filled with heavy riffs and dark and low tunes. Knowing that this was what I could expect I was surprised when I pressed play, and Staff in the Sand started with a very folky tune that wasn’t The Order their sound at all, but made me think more of some Bedouins in the dessert dancing around this Staff in the Sand. But about one minute into the song the thunder strikes and we’re back to the familiar sound of the band. Staff In the Sand, and the following four songs have enough tempo changing and pleasant surprises to keep your attention to the songs without drifting off; which I tend to do often when listening to Doom metal.

The Red Robes and Von Sturmer are your classic Doom metal songs; they’re slow, feel heavy loaded and The Red Robes for sure is one of my favorite songs on the album. In Thrall To The Sorceress is quite the opposite, the tempo goes up, there’s more room for guitarplay and sound a little playful.

But then something strange happens on the album: Fallen Children sets in. The song is somewhat of a folky ballad that doesn’t fit on the album at all and doesn’t sound like The Order Of Israfel at all. Tom Sutton his voice doesn’t fit the song either and this makes the whole song sound somewhat false and very weird. There’s nothing wrong with experimenting and stepping out of the box, but this is just an experiment gone wrong.

Thank goodness some of the best still has to come on this album. After a somewhat ‘film music’ start, A Shadow in the Hills sets in, and with its almost Thrash Metal sound takes you back some years in time. A great up-tempo song that certainly has me swinging.
The band saved the best for last. Lengthy song ‘The Thirst’ is an epic finisher for Red Robes. With heavy guitars and piercing riffs, the song slumbers on for sixteen minutes. I’m not a fan of Tom Sutton his voice during every song on this record, but on The Thirst I find it very fitting and really takes this song to a higher level. Who needs alcohol or drugs to get in higher spheres when songs like The Thirst exists?

Overall I think The Order of Israfel has delivered a great album, though I’m sure they can still grow a lot more. When stepping out of the box, make sure it suits the album and the band. The sound of the album is raw, which fits the music, but sometimes almost tends to sound a little false. But the general heavy sound makes up for that and proofs that this album is a must for all Doom lovers