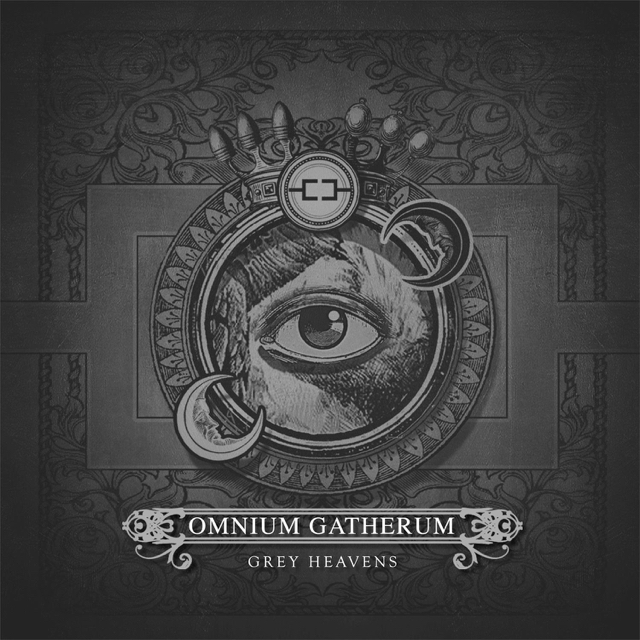 By Wouter B.
Finland. The country of the moose, long winters, a frighteningly beautiful landscape and (probably) the best Scandinavian vodka. The country that also brought forth both some of the best and cheesiest heavy metal bands known to mankind. Where does Omnium Gatherum fit in with their new record Grey Heavens?

On the 26th of February 2016, Omnium Gatherum (Karhula, Finland) will release their 7th full-length, Grey Heavens (and the Fins are lucky enough to have it on the 19th). These masters of the genre deftly combine the typical Scandinavian melancholy, melody and death metal, as they have showed on their earlier releases. Where Stuck Here On Snakes Way was a dark and brutal piece, the band evolved to slower, more melodic and gradually more atmospheric style with The Redshift and the magnificent New World Shadows. Retaining their Northern melancholic (a la Insomnium, Mors Principium Est) spirit, but evolving further on the path of atmosphere, Beyond was released in 2013. Brutality revolving around the fantastic guitar work by Markus Vanhala, it became a personal favorite of me. This certainly raised my personal expectations for Grey Havens.

Grey Heavens directly feels like home, opening a new chapter in the same book after Beyond. The trademark riffing, keyboard interchanged with Jukka Pelkonens’ deep guttural vocals directly carries you to the cold and lonely shores of the Gulf of Bothnia and Finland. The album is grand, almost orchestral and gets better every time I listen to it. An experience akin to Insomniums’ 2014 release, Shadows Of The Dying Sun. The recording (dynamics and transparency for all instruments) is masterfully done, yet doesn’t miss the ‘in-your face’ factor when it needs to.

Opener ‘The Pit’ is the definition of the bands’ music. Fast guitars, forceful gutturals, chopping bass and drums interchanged with melody by Aapo Koivisto (keyboard) and Markus’ guitar. Contrary to the earlier works, clean sung (multi voice) vocals are more dominantly present. This nicely contrasts Jukkas’ voice. Likewise, if somewhat slower, Frontiers is laden with clean vocals. Almost to the (if not beyond) point of being curdled to something akin to cheese (See me care however). Mystery and atmosphere are not lost, however on Majesty and Silence, which feels easy listening initially, but later on includes sections reminiscent of Opeth. This and songs like Ophidian Sunrise make the album a grand and orchestral piece. The four minute instrumental piece These Grey Havens opts for being the best track. Its’ ominous composition and build-up perfectly portrays the melancholic-yet-smiling (and maybe crazy and/or drinking?) character that so often stereotypes the Finnish heavy metal population.

What can I say against it? Well, revisiting the cheesiness argument: There is a lack of stepwise change compared to the earlier releases. That, and the music can be ‘too-easy-listening‘. The former, for fans of Beyond, will only come as a welcome continuation. For adepts of their earlier releases, the clean (sterile?) less-is-more technical approach may be somewhat lost on this album.

[…] Believe in Darkness, I don’t believe in Light ! […] has become a lyrical line that refuses to exit my brain on the catchy piece The Great Liberation. I haven’t been able to skip listening to it a day since it landed in my mail. It’s addictive.