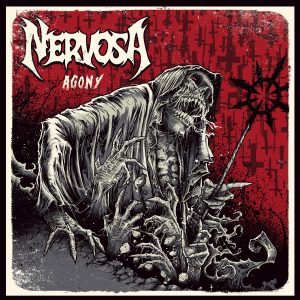 Nervosa from Brasil is a thrash metal band that just released their second album. I’m not familiair with this band but listening to a new thrash metal band is always good. And the band pics shows it’s a three piece female band, something that occurs rarely, so they have my interest.

Opener Arrogance shows exactly what you can expect from these women on this album. Old skool eighties thrash metal. Furious, fast and agressive songs that they fire upon you song after song. Slowly there comes more variation in the songs with some ‘catchy’ parts. I really like Guerra Santa, I could not stop listening to that song. Hostages is another great song with all that is eighties in it. There is really not a bad song on this album. The production is also done good with that eighties feel all over it. Every song brings back other memories or connections to other bands. Mostly and strongly I hear influences from German thrash bands but also from Slayer and Exodus. But in the end they have managed to make it their own and made a great album.

I really love the music and I love to see that new generations pick it up and keep it alive like these woman are doing. I think that this band would be a killer during a liveshow. Hopefully I will see them somewhere in the future.