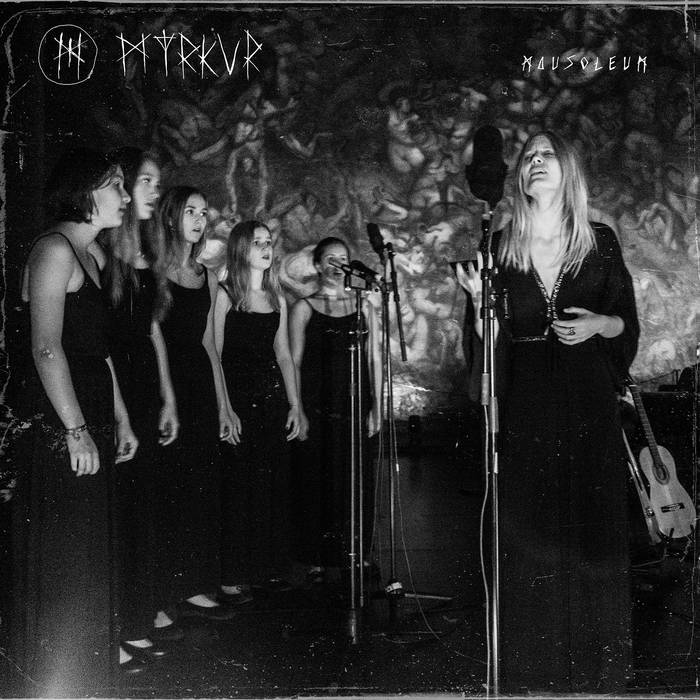 Myrkur (Amalie Bruun) and her 2015 release M is undoubtedly one off the most spoken of metal artists and albums of that year. Some fervently disagree with her and her music: be it because it’s not ‘trve’ black metal, be it because of her voice, be it because she is a woman? Who knows. To feed some of the trolls out there: I thought it was one of and maybe the best record(s) released is 2015. Based on a holistic magnificent experience I (still) have with M: the voice, the music, the composition, the evocation…I think it’s a master…well mistresspiece. As it was with M, being released halfway the 2015 festival season, the current acoustic EP, Mausoleum will be released on the 19th of August.

“Captured in a cold, dimly lit tomb covered in morbid frescos that depict the circle of human life from conception until death”. That at least sounds promising, right? During the recording of M (see review here), Myrkur already made use of the Emanuel Vigeland Mausoleum on some of the songs, for its long natural echo. This time she performed acoustic versions of existing material as well two new songs, together with the Norwegian Girls Choir.

Using just a piano and an acoustic guitar, the songs take a bit of time getting used to. However, even the ‘stripped’ down versions still bear the compositional character and superb quality of the music Myrkur makes: a skillful use of (ancient folk) minimalized melodies with a voice (this time only soprano, no blackened screams) that freezes my every move, regardless of what I am doing.

So then, not really metal? Well, I think it still is: The music of Skøgen Skulle Dø, less buried in speed and distortion, shows distinct use of dissonant notes and (almost) aggressive rhythm twists, even with just a piano. Maybe even more so on Byssan Lull, which sounds more ominous and threatening, even though it’s meant as a lullaby.
The recording also features two new songs; Den Lille piges død (The Little Girl’s Death) and a cover of Bathory’s Song to Hall Up High. The latter is a lovely ode with some noteworthy capturing guitar work, but note as mesmerizing as her own songs. The studio version of Den Lille piges død is already quite a heavy paced and moody track, in the acoustic recording this atmosphere becomes also lamenting.

Maybe that is one of the few arguments one can have against this EP: the variety is a bit lacking; all songs have the same (if brilliant) lamenting and mesmerizing quality. For those who don’t like Myrkur at all: don’t try this EP. For those do like her music, especially her soprano voice: this one is another masterpiece indicating yet again what a talented musician Myrkur is. Personally I think it’s a great treat in between any more music to come from this formidable musician and artist.