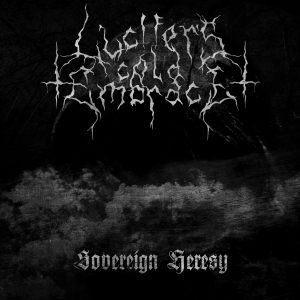 By Wouter
Anton LaVey, Snorri Sturluson, Aleister Crowley, Kain and Jon Nötveidt: predominant inspirational names, contributing in one way or another culture of heavy metal, by inspiring many a band (or fan) to make (or listen to) provoking as well as invoking music. Granted, some of the names and themes are more than gently over-used. But inspiration: I guess it drives us all somehow. Leading to the band under review: Lucifer’s Cold Embrace.

A one man (Martin van Beek) project hailing from Arnhem (NL), inspired by (I guess amongst others) Naglfar, Dimmu Borgir and Dissection. With Sovereign Heresy, he chose to pour his shared love for these bands and their music into songs (which he wrote for his girlfriend).

I met Martin while discussing (and somewhat disagreeing) about Dissections’ Reinkaos at a local gig in Arnhem; as he said it was a dominant inspiration for his own EP, Sovereign Heresy. I was inspired (so to speak) to review his EP and once again try Reinkaos (as I don’t like it as much as the others).

Sovereign Heresy indeed sounds much influenced by the staccato style of Reinkaos, although (slightly bombastic, love it on Rising & Black Death) keyboards also found their way in throughout the album. Indeed, Dimmu Borgir-done-right? One of the best songs, both musically and lyrically, would be The Gift of Life, a true compositional masterpiece. The transitions, aided with and supported by keyboards and blasting (nicely subdued when called for) beats, the acoustic guitar work: it is spot on and fitting to the paradoxical (…Death is the orgasm of Life…) theme of the song.

Maybe not spectacular, but the EP is really good, both in music and production. The riffing is excellent and they have a way of sticking with you. The vocal growls come laden with aggression and hatred (and read the lyrics on The Shepherd’s Rod, you will know :) ), although they can be a bit monotonous at prolonged listening. The guitar solos, the keyboards and transitions (done with skill and spot-on timing) however, keep the EP diverse and worthwhile to listen to again and some more!

The music on the aptly named EP Sovereign Heresy is indeed inspired on many a great name; one may say it stands or even leans heavily on the shoulders ye Giants of Olde. But the myth of complete originality, well…so much brilliant music wouldn’t be there without some inspiration preceding it, would it? However, as it’s done so well by Lucifer Cold Embrace, the music bears itself and becomes its own masterful entity.