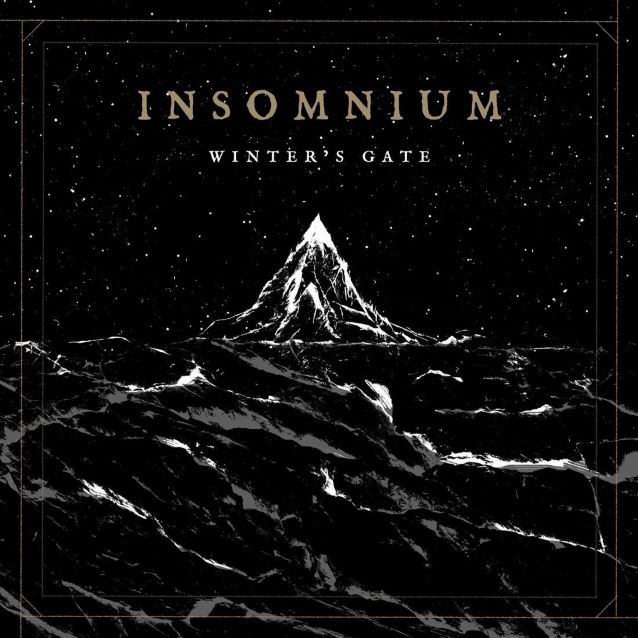 By Wouter B.
Vikings and concept albums – it appears to be a trend in the Northern reaches of Europe. Although there is a Baltic sea worth of differences between the bands, Finnish (fathers of) melo-death Insomnium seemed to have followed a similar path as Amon Amarth did with Jomsviking. But rest assured, their cheese is much more hardened, ripened and less predictable. Ah damn, did I say cheese?

Well let’s begin getting things straight: the book ‘Winter’s Gate’ was written by Niilo Sevänen published some years ago in Finland (titled Talven Portii), managing to get nominations as well as prizes in both 2007 and 2008. This was back when Johann Hegg was still screaming his lungs out on his epic four day ‘Bloodshed of Bochum’ set of playing the first four albums in Bochum (which were awesome, judging by the later released DVD recordings).

Insomnium are what can be described as a (if not the) text book example of melancholic and melodic death metal (melo-death). Ever since releasing their debut full length In the Halls of Awaiting they have progressed but mostly meandered musically with darkened, bleak inspired music. Music however, put on a melody strangely exhilarating and at times even uplifting, so typical for the country of origin. Leaning and growling somewhat heavy on the personal side with Since the Day it All Came Down, Across the Dark and Above the Weeping World the bleakness seemed to be an endless source of inspiration.

The mood was slightly shifted to a more positive feel One for Sorrow, and even more so on Shadows of the Dying Sun, their 2014 release. By the time of recording of Shadows, Markus Vanhalla (also Omnium Gatherum) had joined Insomnium, replacing Ville Friman. Markus has a tendency to work his guitar magic in on a more positive note, slightly altering the signature of the band’s sound. The recording quality improved notably on Shadows, probably due to having Fascination Street Studios at the mastering buttons.

For Winter’s Gate, none other than Dan Swanö (just a few: Dissection, Vinterland, Dawn, Novembers Doom) was responsible for mixing and mastering the album. He did a splendid job making music from the recorded sound.

Winter’s Gate deals with a couple of Vikings setting out to conquer a fabled island west of Ireland, even though winter is at the very horizon. Told through the eyes of three narrators, the lyrics are (to my best guess) a poetic and metaphoric rewriting of the Vikings dreaming of glory, gold and love – yet sadly meeting a cold and lonely death in the end.

The album consists of one song of 40 minutes, although it consists of more or less of 7 parts. The opening is a dramatic if bound for destruction and glory a-major piece, assisted with some lend-in keyboards (Aleksi Munter). The music evolves gradually over the 40 minutes, from the trademark Insomnium melodic death to both slower, more dragged melodic sections and more technical, bordering on progressive pieces. The transitions all occur in a fluid, natural way (almost too perfect), showing how well the composition is thought through. The predictability, which one may expect after so many releases in the melodeath sphere, is luckily mostly lacking, another sign of some long hours of composition refining.

Niilo Sevänen heavy growls go perfectly with heavy riffing while floating on the melody line (clearly, some of Markus Vanhalla’s magic can be heard here). Like the music, the vocals evolve to bits of clean ones and back to growls again, and just as naturally.

Doom and desperation are not missing either, building up towards the concluding and bleak end of the story and album. The two guitars playing intertwined make for quite a magnificent lamenting harmony, heralding the inevitable death at the end.

The album is brilliantly written, composed and produced – it almost feels too perfect at times (granted then, a hint of cheese mongering). But don’t mistake it for an easy listening recording, there Shadows does a much better job. Clearly, the cheesiness that may have been picked up there has solidified, hardened and ripened to a seemingly perfect combination of the many talents Insomnium offers.