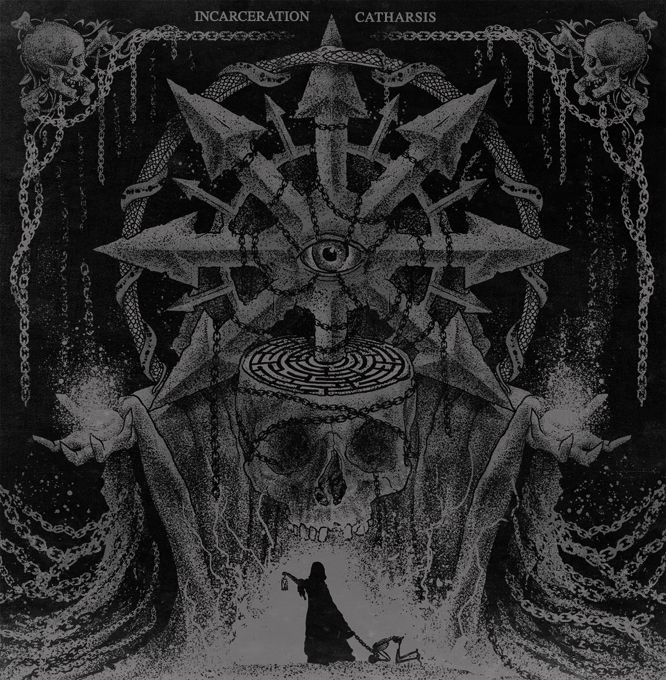 By Omer
Incarceration started out as an idea in the mind of Daniel Silva in his homeland of Brazil. Alone, he managed to get a split album out when he’s in charge of basically everything, but his band took real shape when he found his other members, in the totally- different country of Germany.

Together, the trio released Sacrifice back in 2013, a short 3-songs EP, that received tremendous exposure due to its ear smashing riffs and oldschool feel, which is something a whole damn lot of folks out there are looking for. Followed the release were performances in some European festivals, some larger than others, thus enlarging the exposure the band got.

No less than 3 years after that, the band came up with Catharsis, their first full length, and it’s massive.

I was never a fan of intros, but clearly the band is, since “The Beckoning” welcomes the listener with a nice, shallow guitar riff that spins around slowly, where step by step, it simply transforms itself into a vicious killing machine that is “Evoking The Possession” that opens up with a relentless attack on ones’ ear drums, as fast drum hits collide with skin-cutting riffs, showing that one thing that didn’t change in the past 3 years, was the fact that Incarceration aren’t here to make elevator music, but some of the angriest Death Metal out there.

“Devouring Darkness“, “Infernal Suffering” and “Chaos And Blasphemy” continue the same line, as Daniel’s uncompromising vocals are making his throat work extra hours, screaming some of the most pissed off lyrics (exclamation marks to the masses!) he ever did.’

Musically, one could easily detect a heap of influences that made up Incarceration’s music (from Sadistic Intent to Repulsion and a whole lot more), but I think the most prominent affect the band has, isn’t strictly musical, but in the attitude. The differences between songs are little yet out there, mainly in structures and sometimes in tones and some would treat this as a disadvantage, yet I think the opposite, since it’s in the exact right amount and doesn’t sound too repetitive. Furthermore, it adds to the whole atmosphere (yeah, I’ve said it!) of the magnificent old school works of a band that hasn’t been tainted by large labels yet.

Production is quite good, as the album manages to remain as heavy as possible and as aggressive as possible, while basically all the instruments are heard crystal clear, even as entire walls of riffs would seem to block anything else than the guitar work.

The Brazilian/German group isn’t one that you’d expect a totally instrumental track from, but “Purification” (and “Resignation” later on) is actually a nice halt from all the battles the band just finished waging, but it is what it is, and after a mere 1:30 of oriental-like guitar tone, “Obsessed By Death” storms head on, and as the name applies so well, it’s one of the most violent songs on the album, but also one of the more melodic ones around here, where it breaks from all the angry blast beats for a short time to shed some light on slower musical paths, midway, before returning to its old self of total mayhem, where “Neverending Agony” would follow the same road and behead any remaining listeners, with Daniel’s vocals searing everyone around, easily making his part in the band stand out as a major characteristic.

All in all, this is a 30 minutes work based entirely on destruction and death, this is almost as chaotic as it can get, this is how a band like Incarceration deals you a fistful of violence and it’s damn good.