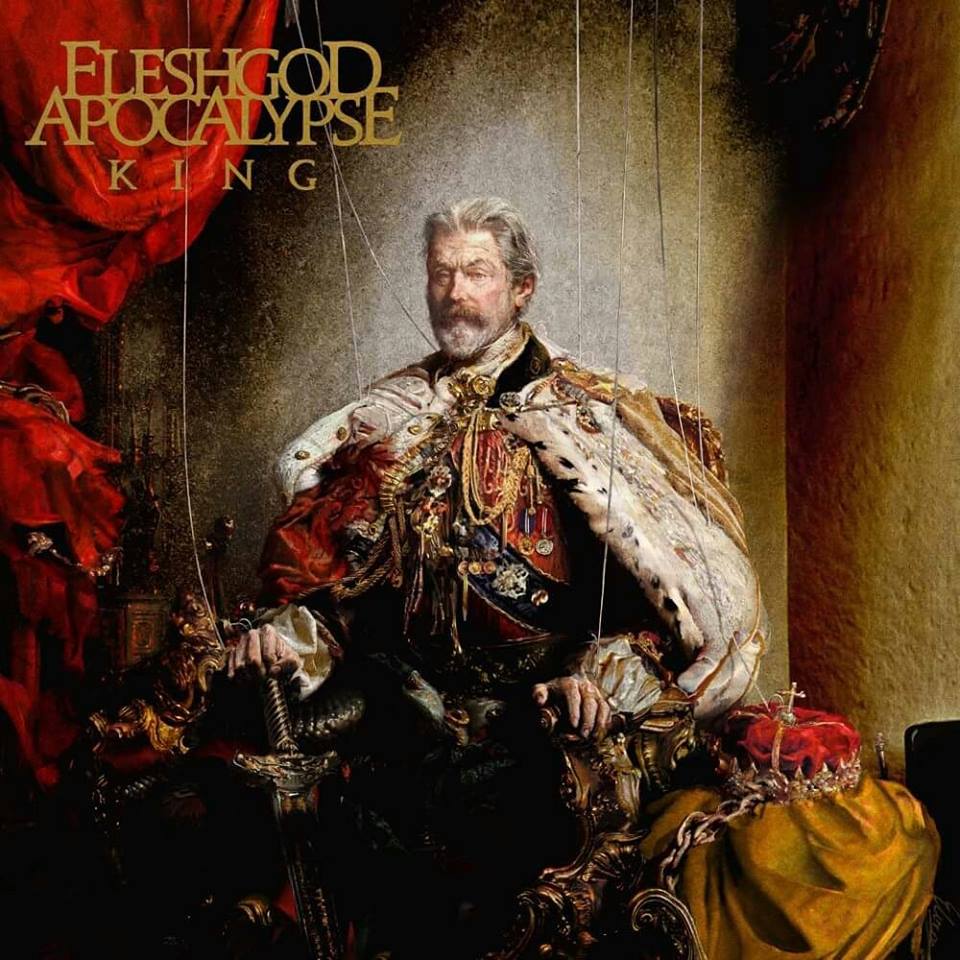 It’s been a while since I last put on a Fleshgod Apocalypse album. I used to listen a lot to the first albums, so when King came on my path, I happily said yes to it!
Fleshgod Apocalypse is a five headed masterpiece from Italy and King is their fourth full length album. The band is known for their bombastic sound, which is the product of combining Death Metal with classical and operatic influences. If you’re a fan of this kind of music and you enjoyed their previous albums, like me, you certainly will love King.
The classical components however are a bit less on the foreground on this album. The album is rougher, and mainly sounds as if one huge wall of sound is coming right at you.

Like the previous albums, King is a concept album. The story the band tells is about a king who has to face many problems at his court but is the only one who stays positive (more about that you can read right here in the interview we did with the band not long ago).

After the intro ‘Marche Royale’ the sound immediately gets bombastic with In Aeternum. This song is truly majestic and also one of the best ones on the album. It’s fast and rough. The high clean vocals are piercing right through your soul. Guitars, drums and keys are everywhere, but they are perfectly balanced and geared to one another.
Where In Aeternum is still pretty symphonic, the album continues a bit more straightforward with Healing Trough War, only to continue in one big organized chaos again with already released track The Fool.

During the somewhat slower song Cold As Perfection, the female opera vocals enter the album. Where during the main part of the album these female vocals are mainly on the background, halfway King we come across quite an unusual song: Paramour (Die Leidenschaft bringt Leiden). This beautiful classical piece is piano and female vocals only. One the one hand it perfectly succeeds Mitra and is a great opportunity to catch your breath, but on the other hand it sounds a bit out of place when being followed by And The Vulture Beholds, which is once again once big bombastic chaos.
Gravity is a bit more heavier and very straightforward; the Death Metal is strong in this one.

Approaching the end of the album, the sound also changes to this mindset. Syphilis is a very heavy dramatic song which really makes you feel like you are getting close to the end of a not so happy story; the end of the story of our king? Male vocals, female vocals and instruments once again are perfectly combined to create this great dramatic ending.
The album ends with title song King; which is a piano only outro, a perfect ending for the album.

The history of Fleshgod Apocalypse is a history of evolving and maturing, and finding a balance in their symphonic sound between straightforward Death Metal, and classical music. With King, the band has put the main focus on the ‘Symphonic Death Metal’, and though it of course still plays a mature role in their music, the classical music has been moved a bit more to the background. Their trademark of creating one huge organized chaos is still very present, but the sound has become a bit more straightforward.