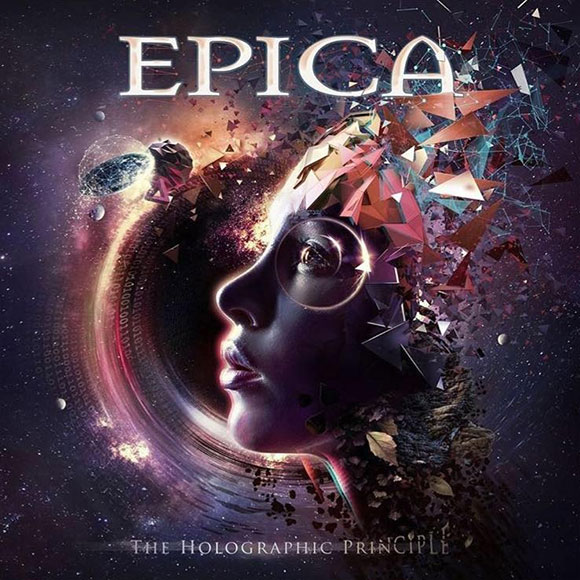 By Laetitia
Dutch symphonic metal formation Epica are pushing new boundaries with their upcoming studio album The Holographic Principle (THP). While the group has been focusing science as a theme with the most recent records, this new effort takes the six piece beyond that. The Holographic Principle is based on the idea that our universe may be a hologram. The band didn’t just push forward in terms of the concept, but also when it came to the recording process: for the first time, the musicians recorded the whole album, every instrument live. What is the result of all this, you may ask. Read on and you shall find out!

For a more information on The Holographic Principle, check out our interview with Epica.

Epica is a band that has always been capable of sticking to its symphonic and metal roots, while simulteanously managing to create varied songs. The album opener Eidola launches you in a dark, filmographic atmosphere and the choir leads you into the first song, Edge of the Blade. This song, the single that you might have already heard, is actually one of the less impressive tunes on THP. It is very repetitive in riffs and choirs, a bit monotonous in song structure and therefore in comparison to other songs, a weak link.

Where Edge of the Blade fails as a catchy single, the song Beyond the Matrix picks up. This ear worm features incredibly fetching vocal lines (the choir!), easy going symphonics and a good groove by the bass and drum. It is probably a first class live song that will make itself comfortable in your head as soon as you’ve heard it.

Personal favorites are Once Upon A Nightmare: a calmer song in which Simone Simons’ use of her warmly coloured, classical voice and the surging symphonies, oddly enough remind of the song ‘Veniality’ and the cover of ‘Cats’ (if you are a newer Epica fan, you might need to look these songs up). Another highlight is Dancing With A Hurricane. The song creates an arabian feeling through an extra layer of all types of drums. The refrain combines compelling melodies and vocals playfully with a metal undertone, which makes it a pleasant song to hear.

Epica wouldn’t be Epica if the last song of the record wouldn’t be the lengthy title track. The entire record is capped again in 11 minutes (only 11? What’s up there guys?). It features a great contrast between darker symphonies accompanied by grunts and the lighter melodies, combined with Simone Simons vocals. It is a very full song, with too many elements to name and it might take some time for the listener to let it sink in. However, when that has happened, you’ll realize that its one of those songs that fits in with the other grandiose title tracks of Epica.

All in all, the previous record The Quantum Enigma was well received and The Holographic Principle is of a similar high level. The live show is supposed to have ”holographic qualities”, so let’s see what the Dutchies will bring to the stage!

Rating: 8/10
Track list:
1. Eidola
2. Edge Of The Blade
3. A Phantasmic Parade
4. Universal Death Squad
5. Divide And Conquer
6. Beyond The Matrix
7. Once Upon A Nightmare
8. The Cosmic Algorithm
9. Ascension – Dream State Armageddon
10. Dancing In A Hurricane
11. Tear Down Your Walls
12. The Holographic Principle – A Profound Understanding Of Reality