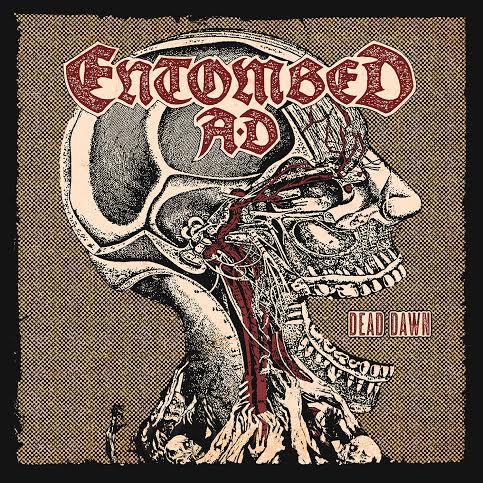 By Wouter H.:
The reincarnation of Entombed is back with their second album. After the departure of Alex Hellid in 2013 in Entombed, the four remaining members had to change the name of the band for legal reasons. Entombed A.D. was born and continued where they left in creating powerful death ‘n’ roll. The first album was released in 2014 and now a year and a half later, the second effort is ready to be released. Expect something of the same vain of Entombed’s 1993 album, Wolverine Blues.

The first two things I noticed are the filthy guitar sound and the mighty roars of L-G Petrov. With these two aspects, the album has its strong moments, especially with the opening track, Midas In Reverse. This is the most straightforward death metal track on this album. The rest of the songs on the album are for a large part simple pounding riffs with basic drumming. There are also semi-acoustic musical passages and tempo changes that attempt to keep the music dynamic, but it’s not enough to keep your attention. It’s hard to distinguish one song from another. The album relies too much on the vocals, the rest of the music is all very basic, especially the drums.

Dead Dawn is a decent death ‘n’ roll album. The roars of L-G Petrov stand out and also the filthy guitar sound is a treat for your death metal ears. Though, apart from the opening track, Midas In Reverse, there isn’t a track that really appeals to me. The nine remaining songs just blend in a mid-tempo death ‘n’ roll mass. So overall, a decent album with nice vocals, just like what they did two decades before.