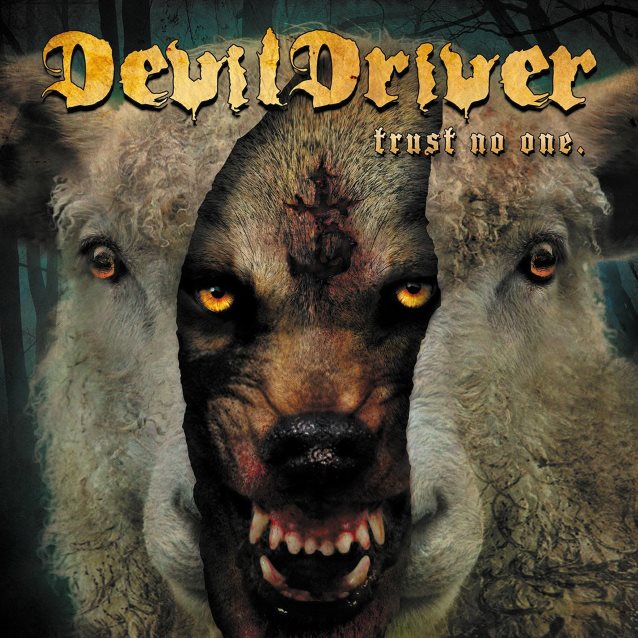 By Omer
Devildriver, coming from the U.S, are one of those bands that I always had a small, warm place for, in my heart, ever since I’ve heard their debut album. They’re certainly not a favorite of mine, yet they’re not bad enough for me to give up listening to them every few years, to see if something changes. Usually it doesn’t.

Right now, it’s the perfect example of what is “From time to time”, as I have to confess. Last album I’ve heard by the band, was The Fury Of Our Maker’s Hand (that was released in 2005), their all-time most renowned album and a very solid one. Yes, I’ve heard bits and pieces here and there, but nothing fulltime. All the bits and pieces I’ve heard over the years, sounded pretty much the same. Same groovy Melodic Death Metal with hits of Hardcore in it, same aggression, very similar sounding albums in total, and it’s all kind of… boring after a couple of songs.
I went to see if the 2016 Devildriver with the record Trust No One changed a tiny bit.

Nope. It didn’t. The album opener, “Testimony Of Truth”, delivers a nice mix of angry blastbeats straight away, lightning fast guitar work, and all topped with the familiar voice of Dez Fafara, the vocalist. The band have always been known to create some of the most brutal album openers out there, and this one is no different. It will ground you to your chair (in my case, as I need to type this review) or send you flying into a random moshpit.

The gas pedal is pressed even harder with “Bad Deeds” and “My Night Sky”, which does provide with hints of differences, as the melodies in the first is something Devildriver aren’t filling their albums with all the time, whereas the latter is a much slower, iconically heavier and funny enough, is way more interesting than the other songs around. Dez’s vocals are still the same, but the combination between the slow and mid paced melodic riffs combined with a very nice (though terribly modern) song structure and smart drumwork, creates one of the nicest tunes in the new album.

As the new release continues, some moments were terribly boring (“Feeling Ungodly” and “Daybreak” as two clear examples of Devildriver’s lack of will to think a little outside of their niche) and some moments were not just good, but really good, such as the title track. A lengthy, melodic beginning that slowly builds up to a fast, aggressive and most of all, interesting song. One of the few here, that really opened my ears up and made me put it on repeat a good few times. It’s catchy yet interesting, the atmosphere reminds a little of Cavalera Conspiracy circa their debut, and it’s not tiring.

Overall, It’s Devildriver, for better and for worse. The problem with Trust No One, is that the amount of yawning the listener would produce, could perhaps top the qualities in the album, and even though I sound harsh, those qualities are indeed there.

I’ll still listen to it every few years when I’ll remember it’s on the shelf, but that’s probably it. Devildriver, making yet another Devildriver album.