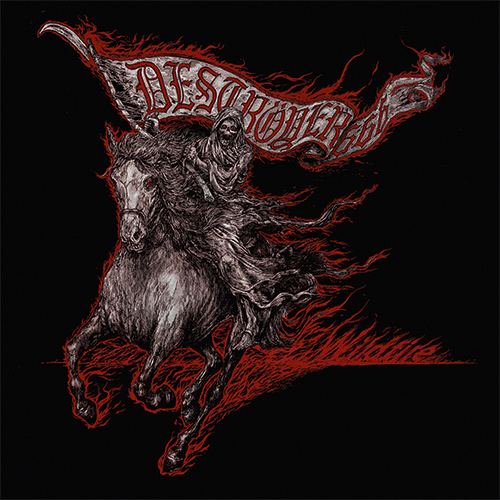 By Omer
Destroyer 666 are usually an easy case in the world Metal scene, since their Thrash-Black Metal have always appealed to most people and the Aussies-by-origin have nothing real to prove to anyone nowdays, having reached to the point in a bands’ life where all of their previous releases have formed a very strong fan base and a wide recognition that spans globally.

Their live performances are highly regarded as well, since they manage to bring the (almost) exact same atmosphere one finds in the albums – onto the stage, which can be a tough case.

Throughout the years, Destroyer 666 have remained one of the most prominent names to be associated with the extreme side of Metal, and rightfully so – K.K Warlust, upon departing from the deceased Bestial Warlust, have created an oiled up war machine that stopping it seems impossible. And who the hell would want to, anyway.

Wildfire, Destroyer’s 666 2016 release, kicks off with “Traitor”. Oh boy, the smile that I had smeared all over my ugly face when the initial riff punched in, would accompany me for the duration of the album. Right on the beginning, it’s fast as hell and evil as Lucifer himself, with skin-tearing guitar parts that spiral down from your ears to your stomach, reminding you what this musical genre is all about.

“Live And Burn” continues the exact same line, as the grumpy double-bass by Perracide dictates the aggressive tune, topped with K.K’s blazing well-known vocals that reach up to some good heights in here.

Present in all of the bands’ history were moments where more classic Heavy Metal was thrown into the mix, with their own musical take and that is exactly what the 3-minute instrumental “Artiglio Del Diavolo” shows, where a bit of melody takes place and provides a breathing space between all the aggressive moments, whereas the first of many, goes by the name of “Hounds At Ya Back”, and like a hound that carefully steps in front of its’ prey, the song slowly but surely builds up, with smart transitions and riffs that circle back everytime, until it reaches several memorable choruses that makes this tune an instant banging song.

Most prominent characteristic about the bands’ new album, is that they seem to manipulate their music in a way that from one hand it’s melodic enough for the ear, yet still, in no way, compromises about anything – when a ton of other bands can’t find the right balance between the two. In addition to that, the several homages and moments that strongly remind of an early-80s NWOBHM sound and lyrics, really manages to play a part here, where it intertwines with the whole aggression quite successfully.

The bit-scruffy feeling the production gives, fits right in, especially if you’re amongst those who love the familiar Destroyer 666 sound and prefer your music a little filthy. Like you should, mind you.

The band doesn’t let go with the title track, nor with “Die You Fucking Pig”, and the listener is thrown once again to the pit, with absolutely zero mercy and compromises about speed and aggression, with K.K is spewing his devilish speeches on top, all the while. The exact opposite happens with the closing track, “Tamam Shud”, where a lengthy and heavy-as-hell depicts the band in another kind of light, one that doesn’t necessarily jumps to mind when thinking about the Aussie veterans, but make no mistake, as they shine in that as well and are versatile enough to keep the level of interest high.

Wildfire is not the most original Destroyer 666 album and I’m not sure it can be considered their best work up to date, but nevertheless, it is a Destroyer 666 album. It’s massive, it’s strong, it’s aggressive, and it’s delivering some of the most pure Thrash-Black material out there.