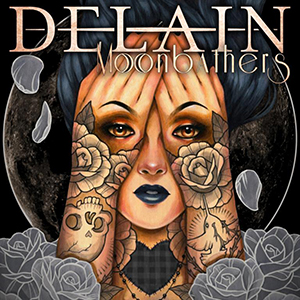 By Michael
The Dutch symphonic metal band Delain is one of those bands that is growing their fanbase quite rapidly. They are touring all over the world and are doing international headliner tours. Moonbathers is the fifth studio album in which Delain will stay true to their nature, to keep exploring new grounds with every album.This year marks the tenth anniversary of Delain, and that is celebrated with a new album and a special show in December 2016.

The album starts off with Hands of Gold, a fast paced, heavy riffed album in which at first I hardly recognized vocalist Charlotte Wessels voice. At first she sings modestly, yet during the chorus, she blasts with power and has a little roar in her voice which I can always appreciate. This, together with Alissa White-Gluz’s (Arch Enemy) grunting, makes this one of the most powerful opening tracks in Delain’s history.

Obviously, it’s hard to keep the listener’s attention after an opening track like that. Maybe that’s why The Glory and the Scum is my least favorite track on the album. Don’t get me wrong, it’s very catchy and very familiar as in the typical Delain sound, but maybe that’s exactly what does not grasp me as much as the other tracks.

Suckerpunch is a song that should be quite familiar among the Delain fanbase. This song was released in a videclip about half a year ago. One of my favorite tracks on Moonbathers is the slow, dark ballad Chrysalis – The Last Breath. Everybody can have their own interpretation of the song, to me it feels like it’s about addiction and depression. In that thought, the ominous singing style of Charlotte in this song, together with the beautiful keys of Martijn Westerholt work perfectly together.

Charlotte said about the darker tone of the album:

“I was looking at the lyrics and some of them were dark to the point of being morbid! There is a lot of thought about endings, both figuratively and very literally; songs about death. Negative emotions are a trigger for my creativity, but though most of my lyrics originate there. I don’t want to glorify it. So as a lyricist I try to make sure that there is always some sort of light at the end of the tunnel. I also realized that when I feel bad, it is sad music more than anything that makes me feel better. So I embraced the idea that it’s possible to find comfort there, and I went looking for a metaphor for finding that light in the darkness, the ultimate icon of that, for me, is the moon. So I chose moonbathers, rather than sunbathers, as a metaphor for those who find comfort in darkness.”

The track Fire with Fire is the complete opposite of the dark Chrysalis. An upbeat power song to make you feel good and energized. Scandal, originally by Queen, is a weird experiment, but it works out. It’s not easy covering a song by Queen and to still give it your own vibe and still have the sound of your own band. Yet Delain has managed to do so, maybe because of the guidance of Brian May.

Turn the Lights Out is once again a catchy song and the album finishes with The Monarch, which to me, could have easily been the opening track as well, leading into the heavier stuff. Moonbathers is a complete record. Let me elaborate on that: It still has the familiar Delain sounds with good guitar riffs by Timo Somers and Merel Bechtold, fast drums by Ruben Israël, a heavy bass riff done by Otto Schimmelpenninck, the smooth melodies of Martijn Westerhold and the diverse voice of Charlotte Wessels. Apart from that, the band is taking risks by exploring new sounds, which makes Moonbathers easy to listen to, yet very diverse.