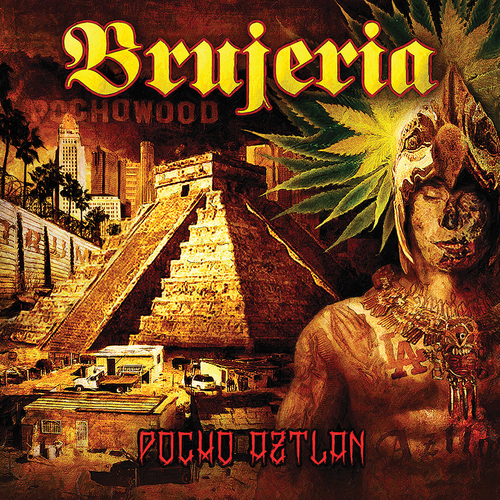 By: Wouter H.
Brujeria is a notorious deathgrind band from the United States but having their roots in Mexico. The members use nicknames and they wear bandannas to hide their identities. This is because they are portrait as mexican drug lords. It also might have to do due to their lyrical content dealing with satanism, immigration, drug smuggling and their anti-american attitude. Either way they seem notorious.

Pocho Aztlan is their fourth full-length since their formation in 1989 and their first in 16 years and the title is roughly translated as “wasted promised land”. The song durations are high for an ordinary deathgrind band. This is because they approached it more often with pounding grooves rather than blasts. It still offers an intense experience with aggressive vocals. The songwriting is as primitive as it should be considered the genre subsequently being dynamic and rhythmic. Some of the chorus’ lyrics are chanted and therefore even catchy into some extent.

Brujeria’s long awaited new album is an intense deathgrind ride fused with heavy grooves. The focus is not on blastbeats, eventhough they’re present obviously, but the focus is rather on pounding rhythms mostly and offcourse the aggressive vocals. But even those can be catchy when they’re chanted which is proven in Profecia Del Anticristo for example. Overall it is a very enjoyable record which will be heard more often in my presence.