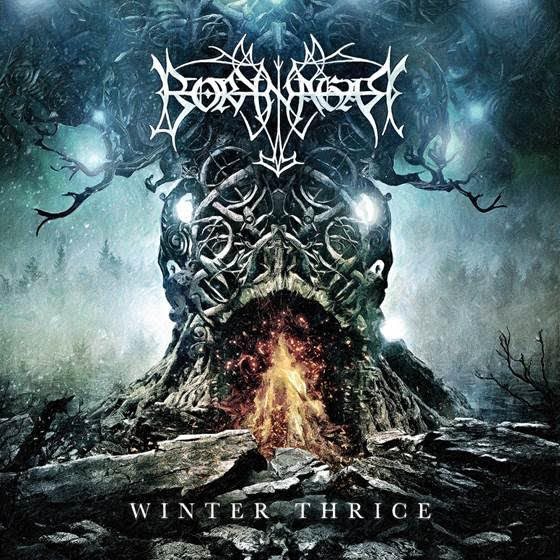 By Laetitia
When a previous record of a band is close to perfection in your opinion, the follow-up has some high expectations to live up to. This was the case with the previous record of the progressive Norwegian metal band Borknagar and their upcoming release: Winter Thrice. The enthralling effort Urd ended up high on the year list of yours truly back in 2012 and especially the majestic song Frostrite seems to be a hard one to top. With both excitement and dread I took it upon myself to review Winter Thrice, expecting something similar to Urd. What I underestimated were the skills of this group to create a dynamic album within their own sound.

The foundations Winter Thrice exists of the same elements as most of the (later) Borknagar material. The body of the tracks are composed of melodic metal, a nod to black metal, the harmonic vocals of Vintersorg, ICS Vortex and Lars ‘Lazare’ Nedland and every now and then the Hammond, providing the atmospheric retro sound on some of these tunes. The first song in this album, The Rhymes Of The Mountain, largely sticks to this formula and would have fitted seamlessly on Urd as well.

The title song, Winter Thrice is without a doubt the masterpiece of this album for many a reason. It is unique in Borknagar history because it features four singers instead of three: the guest vocals of Ulver mastermind and original singer Kristoffer Rygg, a.k.a. Garm. It feels a bit like a follow up of Frostrite. If you listen to both songs, you realise that they are different, yet both entail that monumental build-up, which can largely be attributed to epic vocals of ICS Vortex, alternated with the others singers and the robust metal elements. During the first listen, Garm’s vocals sound a tad uncommon because you just don’t expect that eccentric voice there. Once you’ve adjusted to that, his contribution to this track becomes very compelling.

Another song that deserves a special mention is Panorama. It had to grow a bit on me, but turned out to be one of the most alluring tunes on Winter Thrice. The Hammond plays a bigger role, which might already give you a hint of what is to come. Panorama fuses progressive, folk, metal, 70’ies rock together, followed by an immensely catchy and engaging chorus. On the last song of Winter Thrice, Terminus (suitable name) you’ll hear the most metal, as it is blends ‘old’ and ‘new’ Borknagar. Garm can be heard on this song again and similar to Winter Thrice, it sounds a bit out there first. After a couple of spins, it grows into an integral, fetching piece of the song.

All in all, Winter Thrice is a logical follow up of the previous record, but it is by no means a repetition. I’d say it is right up there with Urd. Is it once again contender for the year lists? It’s to early to say, but it wouldn’t be a surprise.