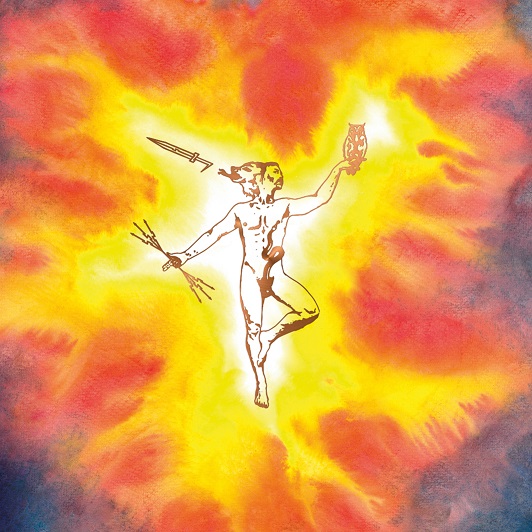 By Omer
We all hear a shitload of releases every year, right? Right. Out of all that shitload, there’s usually one or two albums that we spin again and again and again until the turntable needle digs new groves or the CD is scratched like it had a deranged cat all over it. This has happened to me with all of Bölzer‘s releases up until this day. Roman Acupuncture, Aura and Soma, all fantastic releases that I couldn’t stop spinning again and again.

If you aren’t familiar with the name, Bölzer are a duo from the land of Swiss cheese, with three Eps under their belt, each one more successful than the other, thanks to brilliant atmosphere and song building. I know no extreme metal enthusiast who listened to those releases and wasn’t captivated. I have no idea what’s in the air in Switzerland that produces such a magnificent material-crushing two man band, but hell, maybe all bands should take a sniff.

Hero is the bands’ first full length album, coming 4 years after their initial presentation to the world, and it’s not something minor, as during these past years, the band has managed to create a rather big audience, surpassing the limitations of the (more) underground scene that once held them and it’s a big thing, as opposed to the previous releases, Hero carries the hopes of numerous fans worldwide.

A gentle (and un-annoying!) flute tune opens “Urdr“, that is slowly joined in by ever-increasing tom-tom hits, that after a minute or so, begins “The Archer“, a track that may catch some listeners unprepared, as the case with the larger part of the album. It seems that the band has been brewing an album that is both very similar and very different than previous releases. On one hand, “The Archer” and “Hero“, for example, has some of the best moments Bölzer ever wrote, but on the other hand, the crawling, doomish-like moments and the a-bit-more melodic parts, could scare others off. It is quite clear, then, that the Swiss duo decided upon bringing some of their sound to the next level. Don’t get me wrong, though, as it sounds magnificent and it’s Bölzer at their purest, but it would take much more digestion than the previous stuff.

Do I see some worried faces in the crowd? Fear not, as songs such as “Phosphor” are keeping the flame of aggression alive, the fast drums and the atmospheric riffs blend well with KzR’s throat-scratching vocals, combined with a genius mid song section that is bound to throw you into a hypnotic trance. The vocalist/guitarist also goes to bigger lengths this time to bring forth his abilities to make the most out of his powerful clean singing.

The above mentioned track, alongside gems like the spiraling “I Am III”, incorporates basically every influence there is in this album into one song, from the angry Black/Death we all came to worship of previous albums, to hypnotic moments and I’d dare say a bit psychedelic, in the vein of recent sludge acts. It could sound odd, it could sound horrible – and yet, KzR and HzR manages to turn this big pile of notes and effects into an element that would draw one in.

The brutal “Spiritual Athleticism“, as another example, is what first brought to me to like this band in the first place. The variety in the material is just astounding, and it’s even more impressive when you think that so many different elements are brought together by just two people. This isn’t your average kind of extreme music, this is art at its’ finest form, and it’s the kind of art that would challenge the listener and make him crave for it.

I will admit, listening to Hero for the first time caught me a bit by surprise, as I guess I expected more of the same. It is not usual that a band takes up a different, broader direction in their first full length. I’m guessing that a whole bunch of listeners out there would’ve preferred the gang of two to just stick to their same old brew, but they wouldn’t be Bölzer if they would’ve and if I’m being honest here, this is a serious contender for the 2016 top albums in my opinion.