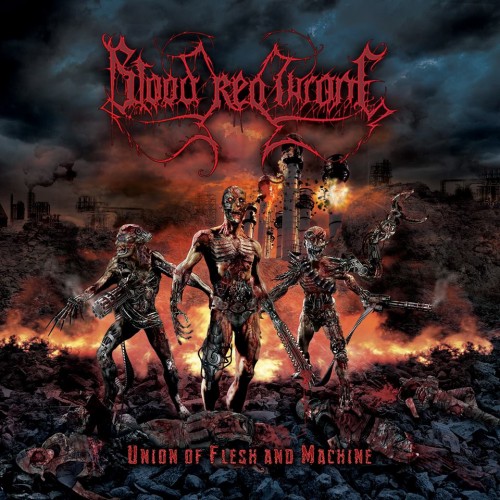 By Tabitha
As far as brutal death metal goes, Blood Red Throne wrote the book. This Norwegian band has been around for 18 years, with guitarist Død as the one constant member, and has been a solid example of a quality metal band with a consistently head banging-inducing sound. The band released its 8th album this year, titled Union of Flesh and Machine. Personally, I’ve always been a fan of BRT’s music. Its fast, brutal music with a primitive feeling, yet all done in a high quality. They also have a knack for choosing brilliant intro’s – one of my favourites from the previous material being the (very short) intro of “Portrait of a Killer” – and the Norwegians were not going to disappoint me this time either!

Now there has been a bit of upheaval concerning the music video that was released a few months before the release of the album. The vocals on that version of “Proselyte Virus” were done by Martin Berger – and they were not received well at all. Personally, I didn’t like the new, slightly higher pitched style (too metal core for my taste) either, but the feedback from the fans really didn’t sound too positive. Shortly afterwards, it was announced that Martin was to quit as BRT’s vocalist and that former band member Bolt was redoing the vocals for the upcoming album (which delayed the release by several months). The official statement gives other, personal reasons for Martin’s early retirement, but I was not surprised at all and to be honest, I was a bit relieved that my favourite death metal band was going to stay just the way I liked it.

The album has been out for a while now – the release date was July 15th – so there have already been plenty of reviews. To sum these up, they mainly are very positive, ranging from 7/10 at the least to 9.5/10. Most reviews agree on the fact that Blood Red throne is pretty much continuing their style in this album, with no real changes or innovations. They also agree that they’re doing a pretty damn good job at it. I share this opinion – the album has the typical heavy, groovy and raw BRT sound – but it just doesn’t get old! The tracks are all just different enough to not get monotonous, but for the rest the album sounds pretty much as one long song – in a good way. There are some nice (bass)solos here and there to keep things interesting , as well as changes of pace and rhythm.

Some of my personal favourites are “Revocation of Humankind” , which is almost catchy (impossible not to tap along to that one) and “Patriotic Hatred” which, after a cool intro from the video game Hatred, blows you away in Blood Red Throne style. I’m not too fond of the “Leather Rebel” cover, but I can see it for the fun extra that it is. I don’t see the point in redoing “Mary Whispers of Death”(From the Monument of Death album) though – the original was fine! This version sounds a bit faster and the vocals are different, obviously, but for the rest I don’t understand what the point of rereleasing it Is. Oh well, it was a great song then, and this version is pleasant to listen to as well.

To summarize: I think this latest album by Blood Red Throne confirms their mastery of the genre. I’m happy that they redid the vocals and I think that the reviews would have been very different if they hadn’t (sorry, Martin). “Union of Flesh and Machine” is a great addition to Blood Red Throne’s oeuvre and it’s been on repeat pretty much since I got it, so if you don’t already have it…you know what to do!