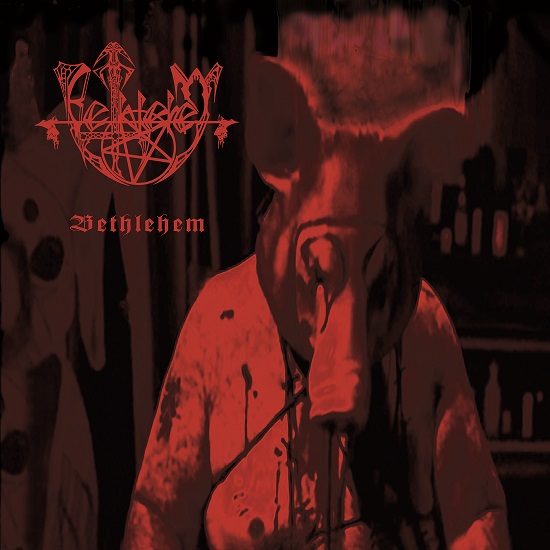 By Laetitia
With their early work, German dark/black metallers Bethlehem left a mark on the underground (suicidal) scene. Especially the record S.U.I.Z.I.D. is to date hailed as an utterly deranged and depressive record. Over the years, the band, or core member Jürgen Bartsch, experimented with electronica and so on. With this 8th release, also signalling the band’s 25th anniversary, Bartsch decided to rejuvenate Bethlehem’s early style.

For this purpose Bartsch recruited new blood in the shape of the vocalist Onielar (front woman of Darkened Nocturn Slaughtercult), who does a more than excellent job with her insane and varied vocals on this full-length, and Russian guitarist Karzov.

Until recently not being familiar with Bethlehem’s work, yours truly has to admit that the band’s aggressive black/thrash riffing, often deranged vocals and a touch of overall (metal) madness are not the easiest to get used to. However, once you’ve gotten past that first awkwardness, the record proves to have a couple of soul-drenching gems. Also, another note on the review, not mastering the record’s language (Deutsch, ja) to a full degree, some aspects of this piece of art might have gotten lost in translation.

‘Ficksel Bomber Panzerplauze‘ and ‘Kalt’ Ritt in leicht faltiger Leere‘, feature piercing riffs and a destructive pace. The latter pushes the limits of chaos and preludes the variety that you will find further along this record, with calm passages that simultaneously make you question the sanity of the vocalist.

A strength of Bethlehem is its diversity. Aggressive tunes are alternated with songs that demonstrate the more melodic side of the band. ‘Arg tot frohlockt kein Kind‘, has an almost catchy, folky edge. The same applies for ‘Verdammnis straft gezügeltes Aas‘, a song that breathes an air of despair with its dense bass line and guitar melodies. ‘Gängel Gängel Gang‘ might be the most haunting track. With a low bass line and Onielar’s spoken words, it reminds you of a twisted fairy tale in which you enter the dark, vast forest, to never see the daylight again.

The Achilles heel of Bethlehem is it’s running time. It wouldn’t have hurt to cut some songs, such as ‘Verderbnisheilung in sterbend’ Mahr‘ (too repetitive) or add it as an extra. The 50+ plus minutes are too much and compromise the overall record in leaving a more overwhelming impression. Nevertheless, on the verge of the turn of the year and in these dark times, this is a good record to have discovered and yours truly will certainly dive deeper into the discography of Bethlehem.