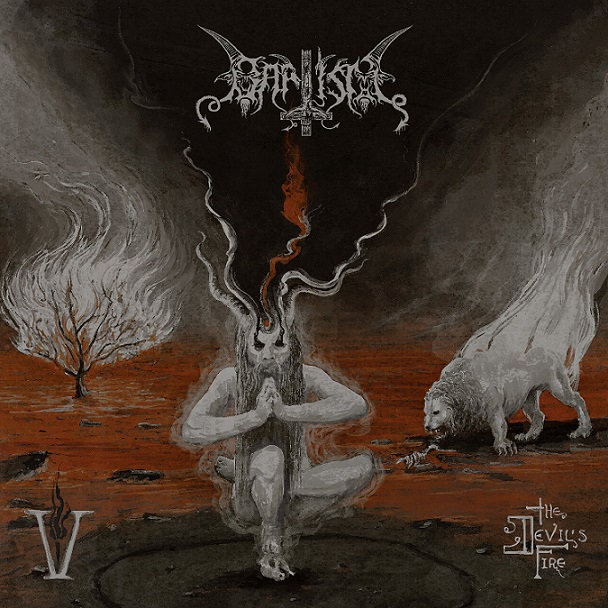 By Omer
Baptism is a bit of an oddity in the extreme music landscape. The brains behind it, is Lord Sargofagian (or just Lord S. for short) and he’s known to be a tidy bit impulsive when it comes to recording periods, or having band members in Baptism. On occasions, he’s all alone, and in other times he’s collaborating with other members to record their devilish tunes.

The band is known to have an uncompromising attitude when it comes to music, which would explain why most of their albums are directed mainly towards those who can endure it with a grin smeared on their faces. An evil grin, I mean. This is Black Metal, after all. How did the all-new, fifth full length album by the Finnish gang hold versus the bands’ old material, you ask? It did great.

The Devil’s Fire opens up with a nice little intro that I could actually bear (and Lucifer knows how much I hate intros and how common they are in the genre, argh), since it was kept to the required minimum, as it is filled with some eerie sounds and distant-felt keyboard strokes, which all in turn create a nice little miniature horror-movie soundtrack.

“Satanada” already delivers everything a Baptism fan could wish for, as the band picks up almost exactly where they left off. The rhythm is uber fast, uber aggressive, and most of all, showing that the past 4 years have been put to hard work. The riffs are addictive (got to be, the album has 3 guitar players working at the same time), even if they’re a bit repetitive, all the while being accompanied by the rasps and shrieks of Lord S. himself.
The rhythm takes a nice, more melodical turn, as soon as Mynni Luukkainen (Horna) is granted the mic, hovering over the aggressive tunes with his deep clean singing.

Don’t let the last bit fool you, as “The Sacrament Of Blood And Ash” is perhaps one of the fastest pieces on the album, from the kicker to the end. LRH (Drums) manages to become a human drumming machine for long moments. Baptism also incorporated the vocal chords of Mikko Kotamäki (Swallow The Sun), and like the previous song, it goes along great with the less flesh ripping melodies which are presented in the album.

The title track, number four, is just as you’d expect such an evil title to sound like – No one in the band would let you go until your ears will bleed, as the road to hell hasn’t been played this fast in a long time. Baptism aren’t letting the listener down here as well, and amidst the heat of battle, a brief mini-guitar solo gets all the possible attention, and it sounds absolutely magnificent.

I honestly think Baptism out did themselves here, as also shown with “Abyss“, “Malignant Shadows“, or even “Buried With Him” (feat. Antti Boman from Demilich) whereas both share the same basic, formulated extreme musical line that, that we all know and love, but both present a renewal in Baptisms’ caliber of abilities. I could do with some less hearable keyboard parts, but that’s just me and frankly, it minimizes in awe, when facing the bigger picture, and that is the fact that the Finnish group has delivered what some of us have waited 4 years to hear, and didn’t disappoint.

V: The Devil’s Fire is the best work by Baptism up to date in my ugly opinion, and a very formidable Black Metal album of recent years. Get it.