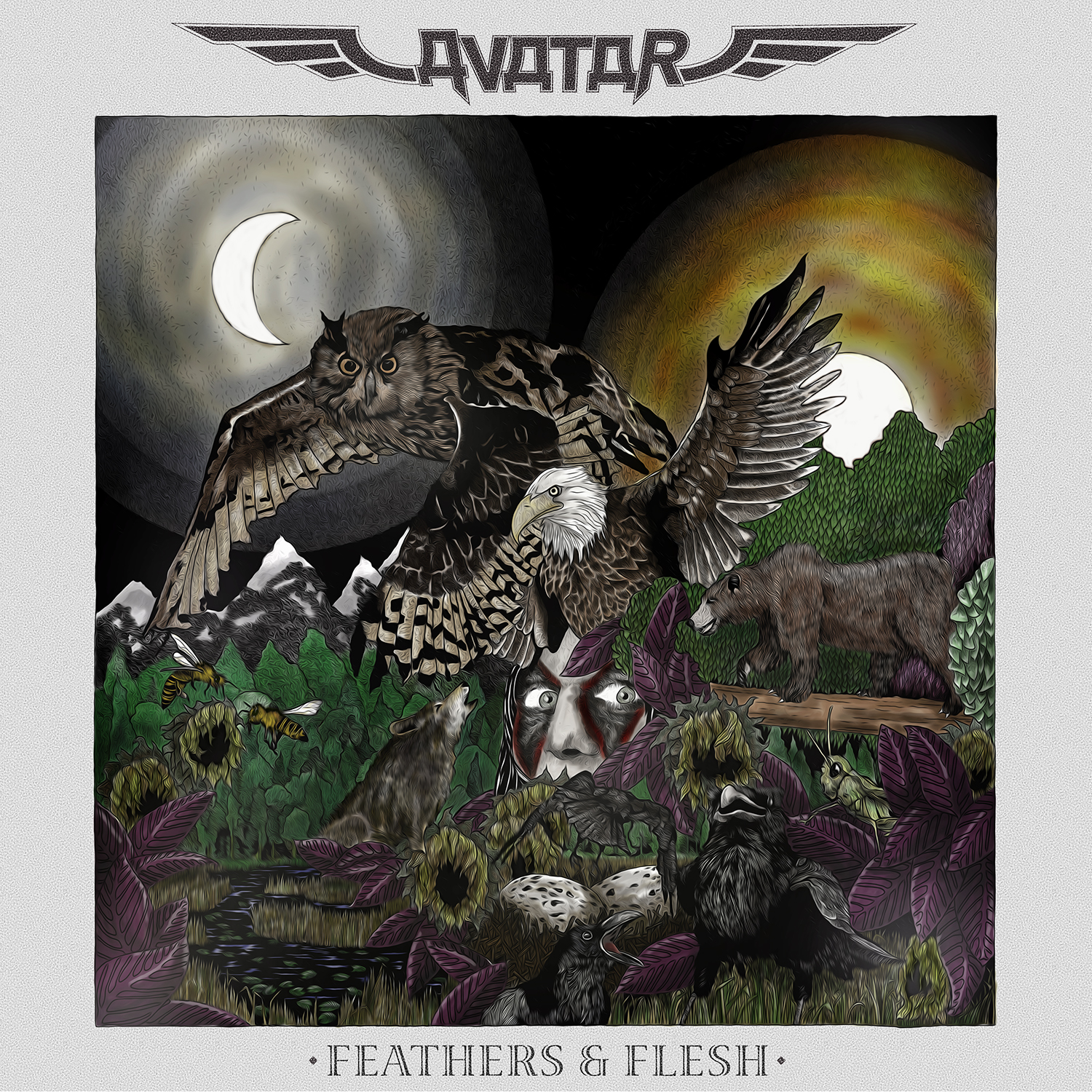 By Laetitia
The records Black Waltz, on which Avatar found their slightly psychotic sound, and Hail the Apocalypse marked the breakthrough of the Swedish groove/modern metal band. The question that naturally comes to mind is, how will this Gothenburg five piece top, or even match a record that was so lauded by fans and metal media? We’ll find out with Feathers & Flesh!

When it comes to the concept, the Swedes definitely brought the album to a new level. The carnival has been exchanged for the sometimes disturbing landscape of fairytales. The album is based on fable. Front man Johannes Eckerström: “It’s a fable about an owl who goes to war to stop the sun from rising. It’s a tragic story of someone ultimately being set up to fail. She will learn many lessons and encounter many other creatures with ideas of their own. In the end, however, one must ask if something was learned at all.” A book has been released alongside the record, for those who are interested in delving deeper into the tale and the psychological aspect of it, an element that the Swedes have thankfully incorporated in their lyrics and stage presence.

The intro and opener ‘Regret’ and ‘House of the Eternal Hunt’, make for two very strong starters. The intro lures you into the album with sinister sounds from a worn down music box. ‘House of the Eternal Hunt’ combines energetic, sweeping guitars with an almost folk metal beat and vocals anchored in the extreme/death metal roots, from which the band once came. While listening to these first songs, I couldn’t help but think that Avatar managed to outgroove Hail to Apocalypse.

That feeling has not subsided and this record definitely holds masterfully crafted piece which prove that Avatar has kept on growing and have no regard for the straightjacket of genres that some metal bands put them self in. Take ‘Fiddler’s Farewell,’ a somewhat odd slow tune, with vocal lines that sometimes would fit right into a rock/pop ballad. However, a couple of songs lack a similar strength. While most of the songs contain a certain hook, whether it is catchiness, strong riffs, a undeniable groove or a death metal basis, others, like ‘New Land’ come across a bit bland. ‘For the Swarm’, falls in the same category. It may be essential for the story, but it doesn’t come across like that immediately.

All in all, Avatar will not disappoint their fans with Feathers & Flesh. The record draws upon the same groove, diversity in music and madness that made the Swedes well loved in the first place. Does it top, or live up to Hail the Apocalypse? I may not be a fan of all the songs on this record, I certainly think that Avatar have matured with this effort, so the answer is yes.