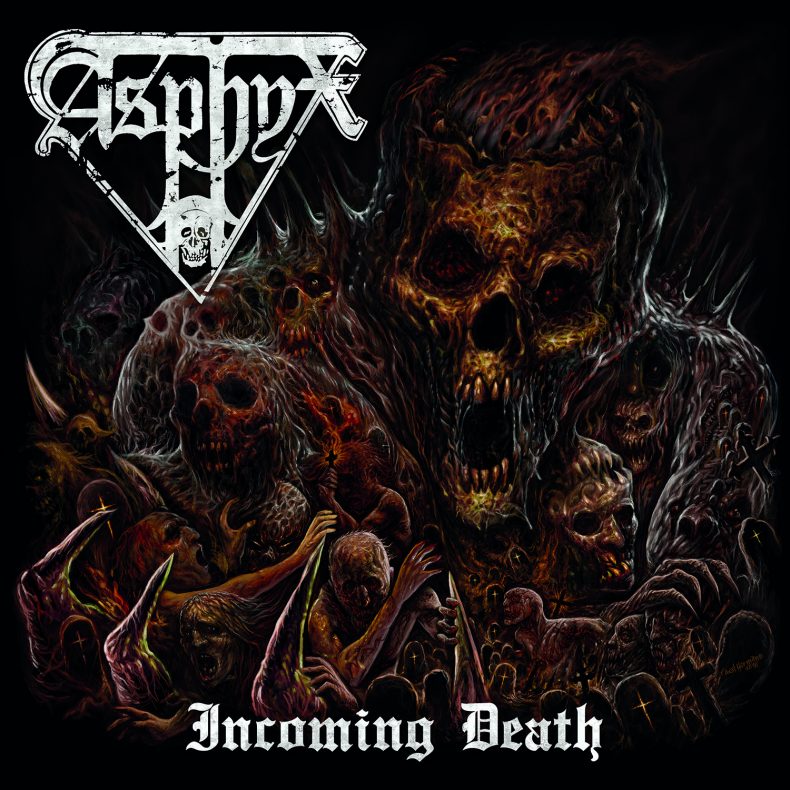 By Laetitia
Asphyx is a Dutch death metal legend in its own right. I dare say that an average death metal fan will love every fart they produce, but there are also metalheads out there who think they are overrated and yours truly is one those. Do not get me wrong, I appreciate the band and their pioneering role in the genre, I just tend to think that inventing the wheel over and over again is not the best approach to music and I’m not the biggest fan of van Drunen’s raspy vocals.

You can imagine that I was quite surprised to find out that the latest album of the four piece, Incoming Death, is one that I enjoy.

Songs like the devastating opener ‘Candiru‘ and ‘The Feeder‘ are trademark Asphyx tunes with a crushing weight in riffs and stomping drums. In all honesty, while these tunes are exceptionally great for a round in a mosh pit and to hear a few times, these are exactly these type of songs that have always put me off this band after a while: they become dragging and with 10+ tunes like this, monotonous as well.

It’s mainly the songs like ‘Death: The Only Immoral’, Subterra Incognita, and ‘The Grand Denial‘, the more slugdy, doom-infused tracks, that have me listening to Incoming Death with sincere interest. The three songs are slower and a lot more melodic and dynamic than other tracks on the album, resulting in a more epic vibe (if you want to call it that). The guitar leads on ‘The Grand Denial‘ are even hopeful and uplifting at times. All in all, it makes these songs more memorable and impressive in comparison to another quick riff-assault of a few minutes. There is some real quality song writing hidden there that does not come out on the other tracks.

Personal tastes aside, Martin van Drunen and his comrades delivered an album that is as solid as a tank. The sound is incredibly thick and hazy, but it fits the battlefield atmosphere on the record. The ferocious, raunchy riffs will make the heart of any death metal fan skip a beat and the unique hoarse vocals will pleasantly ring in their ears like the sound of a trench bomb that just exploded. As for me, I’ve discovered a side of Asphyx that makes me appreciate the band more. The question remains if that is an opinion that will last.

Rating: 7,5/10
Tracklist:
1. Candiru
2. Division Brandenburg
3. Wardroid
4. The Feeder
5. It Came From The Skies
6. The Grand Denial
7. Incoming Death
8. Forerunners Of The Apocalypse
9. Subterra Incognita
10. Wildland Fire
11. Death: The Only Immortal