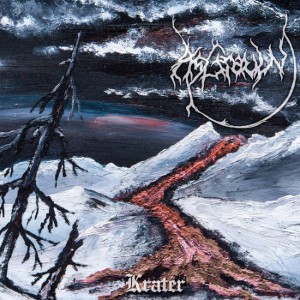 By Wouter B.
A magmatic spasm shaping a 200 year period of cold and ash laden utter sunless darkness. Set to erupt on the 11th of March, with Dutch black metallers ‘Asgrauw’ releasing their second full length ‘Krater’. Don’t know them? Go listen.

Asgrauw translates as Ashen grey, but also refers to the scythe shaped new moon. This Dutch three-man black metal formation (Groesbeek) produces music in the spirit of the 90’s black metal sound. Ice cold riffing, single as well as dual vocals to chill your spine, combined with a melodic side, they produce a unique sound. Their 2014 first full length ‘Schijngestalten’ is a release I rank among my better Dutch finds. On the 11th of March 2016 they will release their 2nd full length; ‘Krater’ (Crater).

Krater opens with its namesake, initially using dragging, half tempo riffs. The blasting beat (Batr) drives the song on, floating on the interchanging vocals. The volcanic mayhem is initialized and there is no turning back from listening now. Whether it’s blasting favorite ‘Natuurgeweld’ (Natures’ Violence), a composition of fast and vast violence, or Deken des Doods (Deaths’ Blanket), an up-beat celebration of destruction: this album is hard to let go and sit still at.

Where ‘Schijngestalten’ had an aura of mystery, darkness and fear, Krater comes across as metaphor for the earth in revolt. A volcano, erupting in a convulsive and apocalyptic explosion of anger, aversion and hatred. It took me a while before digesting this somewhat ‘down to earth’ approach in a music genre otherwise filled with esoteric, satanic, sometimes Romantic or even otherworldly inspiration. Nonetheless I have the come to like the album a lot, given the desperation and underlying exclamation of futility. The dark screams and merciless riffing (Vaal, guitar and vocal) and second vocal (Kaos) are aptly mingled and switch dominance, keeping the music lively and without a dull moment. Superficially, the music may be something you have heard before, given its’ trademark black metal (Darkthrone, Ulver and Emperor influenced) sound. But the combination of the Dutch sung lyrics with the dual toned riffing is again brilliantly done on Krater.

The production, fully done by the band itself, is improved compared to Schijngestalten, with clearer vocals and a much more dynamic guitar sound. Don’t worry though: it’s still a black metal production with a cold, lifeless sound.
Asgrauw. You might still not know them, but go listen.