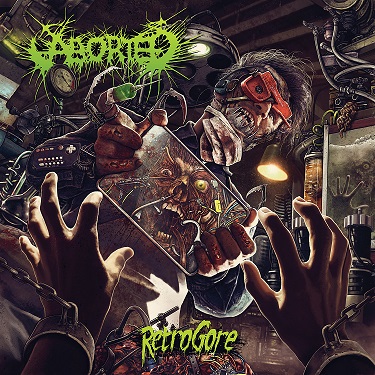 By Wouter H.
Aborted is a brutal death metal band from Belgium known for their gore inspired artwork and lyrics. With an impressive carreer of eight full-lengths, Aborted unleashes another bulldozering death metal record upon us. The artwork reveals we can expect the same extremity from them and maybe even more.

As expected the furious blastbeats will hit you like a herd of bulldozers. Aborted however pushes their extremity on this record with manic tempo changes. Ominous atmospheres make way for walls of aggression so rapidly. And thus the blastbeats appear even more extreme. Plus the combination of screams and gutturals by founding member Sven de Caluwé appear to suit better on this album. Overall the album Retrogore surpassed his brothers of the last decade.

Retrogore is an improvement in brutality and extremity compared to his predecessors. The vocals of Sven de Caluwé are intense and the music is more complex, yet typical Aborted. Fans of Aborted surely will not be dissapointed with Retrogore because it has more to offer than the previous albums. Great brutal death metal!