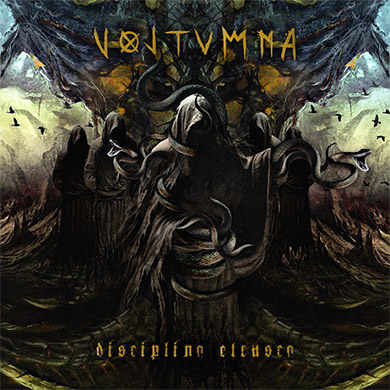 By Wouter B.
If the supreme god Voltumna of the Etruscans demands a listen, we may experience a slight tugging of our blackened souls at Metal Exposure. Who knows, maybe these Italian blackened death demons capture our souls into worshipping this foreign and forgotten deity.

The Italian four-piece pays homage to the mythical past of Italy by their name. Voltumna is the deity who ultimately became the supreme god in the Etruscan pantheon. Disciplina Etrusca is Voltumnas’ second full length, released in March this year. Upon hearing these guys are from the country that brought forth Lahmia and Fleshgod Apoccalypse, my soul was more than tugged, as these are both quality death metal bands with a good bit of Italian bombastic drama and melody.

Rome has to be destroyed in their opening song Roma Delenda Est. A threatening, epic intro, pounded into shape and song by their amazing drummer Bruno Forzini. Simone Scocchera vocals change from grunts to screamisch incantations and gutturals, backed the rest of the band when proper.

The single guitar, done by Michele Valentini, sounds good on the Prophecy of One Thousand Years. The album can be a bit boring on the guitars, which is sad given the rest of the quality. The keyboard samples interplay very well though on Prophecy, making it an easy-listening but still killer song; one of the highlight of this album. Again drummer Forzini shows his skills, a promising talent that may even be comparable to Fleshgod Apocalypse’s Francesco Paoli? Tempo changes, thundering blastbeats and playing an instrument instead of just providing rhythm, this guy keeps me listening.

Sadly, both Disciplina Etrusca and The Alchemist again suffer from sounding dull, as one guitarist can only do so much. This is covered partly with keyboard and samples (Bubbling? Drowning? Yes, even some moaning women. That went cheesy upon hearing it again and again). Giovanni Tomassucci does a good job on bass of covering for the single guitar, as can be heard on the instrumental piece Bellerofonte. The thunderstorm intro of Bringer of Light brings back the interplay between vocal, guitar and bass to where it’s supposed to be: En route to destroy.

Tages, Born From The Earth is about the legend of a baby with an adult mind risen from the Etruscan acres. Too bad these well thought off lyrical themes become uninteresting after a while, unless you really prefer repetitive death metal riffing, which is more or less the case until the cover of Venoms’ Black Metal.

If it weren’t for the drumming, I would have lost my Etruscan discipline before the fourth song, given the overall guitar pieces. Fortunately the complete cocktail of drummer plus vocals kept me listening. Consider a second guitar to provide some variation and melody and I may even have become an adept. For now this album failed to really hit the mark with me, although the potential is definitely there.