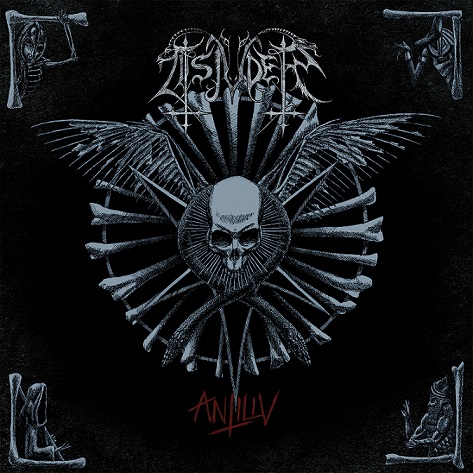 By Laetitia
The Norwegian black metal formation Tsjuder have a new album out, called Antiliv. Treat yourself to a trademark effort from this band: a hellish assault with a rhythmic edge that will get your head bobbing in instant. Antiliv is exactly the kind of album you need while the days are getting shorter..

With infernal blast beats and chainsaw riffs the opening track ‘Kaos’ lets you know that you are not listening to something for the weak hearted. With his screechy and tortured screams, vocalist Nag gives you a promise: ‘I am your nightmare, I am your hell’.

On the song ‘Norge’ another side of Tjsuder shines through. The punishing riffs turn into the aspect that makes the song catchy to a certain level: they become outright groovy, dare I say it, even danceable. Don’t worry about a disco-metal song though, the raw vocals and whipping drums and straightforward riffs in between make-up for all this.

During the first few spins of Antiliv, it might appear that you are listening to a wall of noise and that the distinction between the songs is hardly recognizable and that is probably true for a couple of songs (‘Krater’ comes to mind).

Luckily there are songs like the title track that are more memorable. ‘Antiliv’ (the song) is the most impressive of this record. It starts out pretty calm, with mid-tempo riffs and rousing drums and vocal lines (this will be an excellent live song, it just urges you to head bang, a lot). After about four minutes, the song transcends to a new level: the riffs become sharper and the drums slower, yet heavier: majestic in a way.

So while some of the songs on Antiliv lack a bit of back bone, some of the others are nothing short of great and for that reason I’d advice any black metal fan to pick up this record.