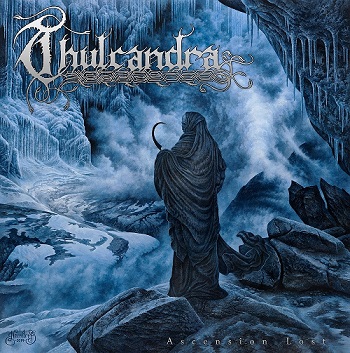 By Laetitia
Not too long ago, Munich black metallers Thulcandra received the title ‘best Dissection clone’ and that was not meant in a demeaning way. What this four piece does is writing heavily Dissection inspired tunes in such a way that it does not feel like you are listening to The Somberlain or Night’s Blood all over again, but use the legendary sound to create songs that can stand on their own. Thulcandra’s debut, Fallen Angel’s Dominion, was a delight for Dissection fans, the band’s second effort, Under A Frozen Sun, nothing short of a masterpiece. Let’s see what this third record, Ascension Lost, will bring.

For reasons that will be explained shortly, it took yours truly more than one or two spins to appreciate this album for what it is. Among the favoured songs on Under A Frozen Sun were tunes like In Blood and Fire, Echoing Voices (A Cold Breeze of Death) and Black Flags of Hate, three guitar-dominated songs with high-pitched, distinctive leads. These kind of elements are the ones that immediately grab you. Now, it is not claimed that that such elements are not present on Ascension Lost.

On The First Rebellion, a song that catches the atmosphere of Dissection flawlessly, the guitars are impressively lamenting the passing of the standard-bearer of this genre. Not to mention Exalted Resistance encompasses the echoing drums, the aggressiveness of a blizzard and indeed that spine-chilling lead that sets the tone for such a song. The rather straightforward tunes like Throne of Willor Sorrow of the One are the ones that might escape your attention during the first few spins.

As said, Ascension Lost needed to grow on me for a bit. The last mentioned tunes will not end up on the favourite tracks-list but can be appreciated for their directness. As for the rest of the album, it can be said that Thulcandra continued on the path of paying homage to Jon Nödtveidt by creating yet another effort that celebrates this metal style rather than purely copying it.

Rating: 8/10
Track list:
1. The First Rebellion
2. Throne of Will
3. Deliverance in Sin and Death
4. Demigod Imprisoned
5. Interlude
6. Exalted Resistance
7. The Second Fall
8. Sorrow of the One
9. Ascension Lost
10. Outro