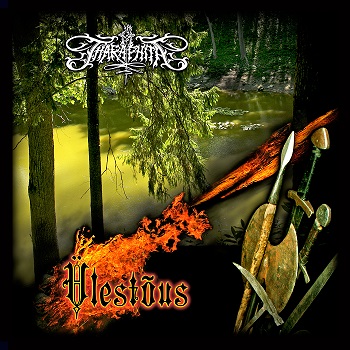 By Laetitia
Thundering, galloping riffs, brutal vocals and war-like anthems. The deity Taarapita (the Estonian god of thunder) would be proud of his worshippers, the pagan metal band Tharapitha. Ülestõus, meaning uprising, is the bands fifth full-length offering and it was released about a year ago. Most of us all familiar with (the highly appreciated) Skyforger, but it is nice to be introduced to another band hailing from the Baltic States.

The Estonian pagan metal formation was created as a project of the vocalist-guitarist Ank, but it turned into a full fletched band after a couple of years. Tharapitha quickly found their own sound, which can be described as pagan metal, but without any flutes, wacky songs about drunk, dancing elves or insert what else crosses your mind when you think of the pagan/folk genre.

The trademark of this band is especially the use of the galloping riff, which makes the music quite catchy and up-tempo. The opening and title track, Ülestõus, demonstrates that perfectly. Despite of the high level of gripping melodies, Tharapitha also brings a more heavy element into the music. The thrashing, rolling drums and the rough, high-pitched growling vocals, balance out the (otherwise overkill) of bounciness.

While the record is catchy and easy on the ears, there is one thing that needs to be noted. There are some songs or passages that almost sound identical. The riffs are played a little differently, yet the overall song structure is very comparable. As a result, there is a chance that you feel that you’ve heard it all when you arrive at the fifth or sixth song. If Tharapitha works on variety a bit more, they may have a better shot at getting more widely known.