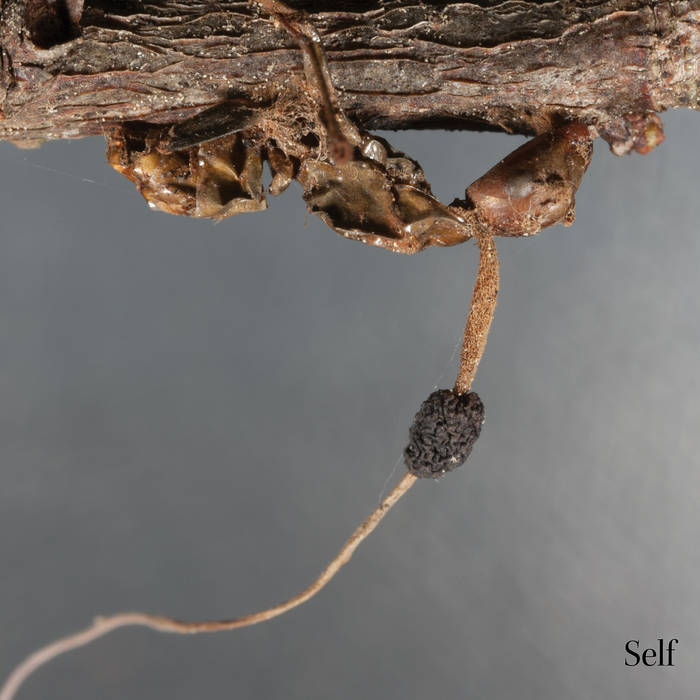 By Wouter B.
Dutch (post)-black metal formation Terzij de Horde have released their first full length CD titled Self, in October of 2015. You may have missed it, but we haven’t. An invoking name as well as front cover, so what about the music?

The cover of Self is a direct (and biologically brutal) link to the theme under discussion: Self. The picture portrays an ant infected with a fungus (Ophiocordyceps) which ‘zombifies’ the ants’ brain. That way it leaves the colony seeking a place higher up. Once there, the ant itself dies but the fungus can spread its’ spores more effectively. The ants’ Self is absorbed, modified and finally obliterated. But it began as a worker drone in a colony, so what is actually obliterated? Questions not answered but more or less reviewed on this album, about the struggle to live with oneself, the world and the innerself.

Or, in the bands own words:

[…] Instead of navel gazing or the worship of constructs, ‘Self’ is analysis forced. A cerebral celebration of liberation at all costs and a requiem for spheres rendered apart. […]

Generally focusing on (Dutch) literary and poetry topics, Terzij de Horde (Aside from the Hordes) does not make your ‘average’ (post) black metal (as far as that exists). No surprise than, their CD also comes with a reference list of books to read and broaden the background on the inspiration of this Dutch four piece.

Terzij de Horde flirts musically with the literary vitalistic genre; focused on living life intense and even dangerous. Give the art your all, especially on stage, almost to die for. This is audible in the music as well as live (yours truly attests). These flirtations mostly leave me with the feeling of not being able to catch even my own breath.

The opener Absence starts of very chaotic if intense, but changes to an eclectic set of styles (post; black and punk) seemingly random collected. This is slightly compensated with some rare drum sections that feel more natural. A Marriage of Flesh and Air is at times more melodic and in my opinion Selfs’ best song. Bass heavy Averoas begins with a promising doom atmosphere if not for the hysteric intermezzo that more or less finalizes the song at one third playtime. Terzij could have left it there, but elected to prolong my personal suffering by having to listen to another four minutes of this angst and chaos ridden composition.

What really killed the music are the vocals. The forced (hysterically high) screamish grunts made not switching off the album true effort. In fact, I might have done so anyway more than once. The entire album comes off, with all it’s chaos, as musically unattractive. The suppressed and clicking drums keep on plodding or blasting, without the variations I crave so much for. Although they follow a path of some melody, the same holds for the guitars.

A more positive note on the recording quality: Aside from suppressed drum recording (which may be intentional), the guitars and bass sound as if played right next to you. Laudable lyrical themes aside, the album did not resonate well with me or my own self. Nor was I very much impressed with the variety, musicianship or creativity. It failed to hit my mark.