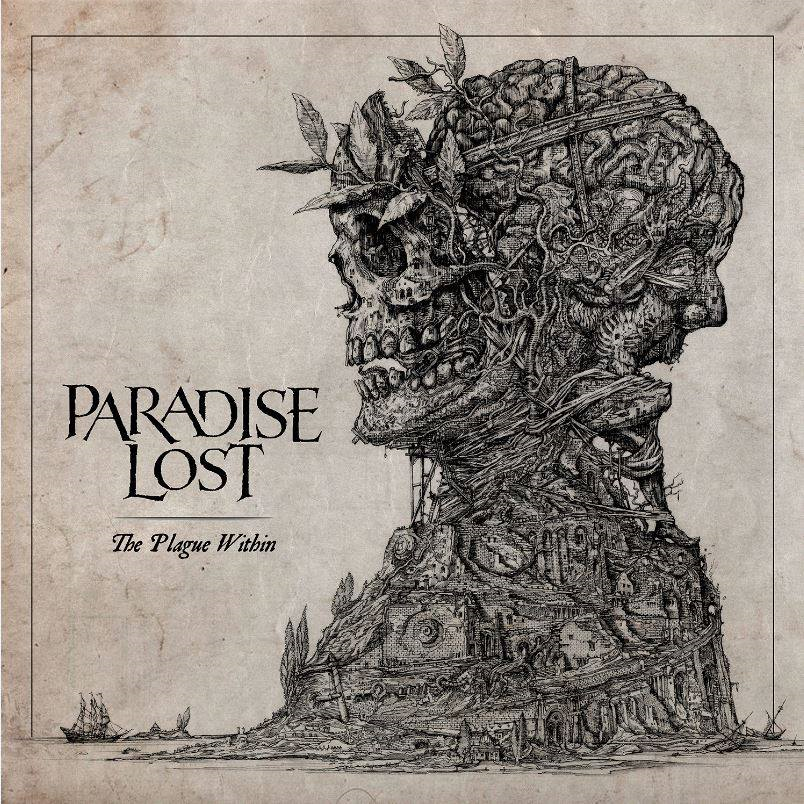 By Wouter B.
Belated slightly? Yes. But we could not refrain from reviewing the 13th album of the legendary Paradise Lost. While neither being a big or familiar fan of their earlier work, I happily took on the Plague based on their gruesomely beautiful front cover. I got infected.

Paradise Lost is a band I couldn’t get around, although I’ve kept it up for more than 10 years. The British inventors of the Gothic Metal genre have released their thirteenth album: The Plague Within. The opening song is a measure of the rest of the album: magnificent. Every small bit you may have loved in their earlier albums is here: great (lyrical) composing abilities, dreary and depressing doom drumming, fantastic guitar work and solos, the gothic metal these guys invented.

Every song feels like it wrote itself and was meant to be: whether Nick Holmes’ croaky bark pieces on Terminal or the combination of clean and growls on An Eternity of Lies. The solos are great for the melancholic and depressive sound that is the trademark of these Brits. Given, for me solos are one of the reasons for my continued hitch hike through the metal universe. So maybe I am biased as hell, but that doesn’t make Plague sound any less awesome.

Punishment through Time is one of their moodiest and heaviest pieces on the album, with a plodding bass and drum line that drag you through the swamps of past, present and future. Almost as heavy, if not slightly more so, Beneath the Broken Earth takes those of you about to die to the grave. Yes…that includes you too.

Sacrifice the Flame uses a cello intro theme supported by Steve Edmondsons’ bass work. The unbeatable combination on Sacrifice of clean and grunting vocals set down another masterpiece of dreariness. The combination of that theme with long, slow riffing, is real art. Magnum opus and personal favorite Return to the Sun opens with an orchestral piece and a dual chorals, followed by the signature heavy long riffing and melody infills I have come to love so much.

Even the feeling of “yes, you’re sad, depressed and maybe a bit nihilistic and make gripping, haunting and emotionally laden music…music we’ve heard countless times before” I get when listening to The Plague Within doesn’t stop me from doing so. It’s so well composed, heavy and even aggressive (Flesh From Bone). It’s sheer beauty by sadness and grief is just daunting.