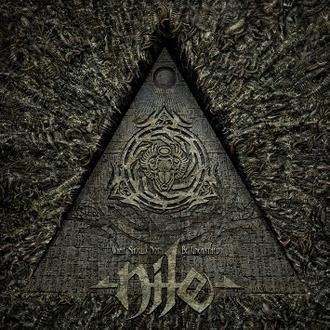 By Laetitia
The reigning pharaohs of Egyptian-themed metal Nile are about to scourge their people with their 8th studio album, What Should Not Be Unearthed. Can you expect the trademark Nile sound in the form of technical riffs, the whipping blast beats of George Kollias and the disturbing gutturals of Karl Sanders? Yes, Nile are Nile and that is not a bad thing.

In statements made by mastermind Karl Sanders on this latest effort, he comments that What Should Not Be Unearthed focuses less on musicianship (although the band has no trouble proving their skills on this output). Nile aims to emphasize the sheer force and brutality again on this record, along the lines of the masterpiece Annihilation of the Wicked.

With this album, Sanders and his comrades explore what lies underneath their beloved ancient civilization: “The story behind the title goes deeply beneath everything we have already known, and we may not be ready to face. With the art I excavated the theories of an elder ancient civilization which could give the origin to ancient Egypt. That’s why you can find a new ingredient in the band imagery, pointing at some higher obscure intelligence, eroding and covered with time. That trace of a dismal legacy is resembled in the outer structure which radiates from the block, sealing the unknown, and it’s only an adumbration of what we will meet, once it is removed.”

The albums open with ‘Call to Destruction’, which has already been released as a lyric video recently. While the lyrics quote an actual call to destruction of Egyptian pyramids (which was claimed to be a hoax later). The message that Nile wants to communicate with this song (and the video) is to give attention to the wanton destruction of artefacts in the Middle East. Musically, the track sets the tone for the record. Its welcomes you with a devastating and familiar force: punishing, edgy riffs, relentless blasts and on top of that, the deadly vocals.

The songs never fail to leave an impact. ‘Liber Stellae Rubeae’, is like steamroller, although it rolls down a trodden path a bit. During ‘In The Name Of Amun’, (and later on the intermezzo ‘Ushabti Reanimator’) the Egyptian theme the surfaces and this track exemplifies that Nile are masters of dynamic song writing, while staying loyal to the sound that made them big.

‘Evil To Cast Out Evil’, is one of the personal favourites. Looking at other favourite songs in the Nile discography, this is not a shock. ‘Black Seeds of Vengeance’, ‘Those Whom The Gods Detest,’ ‘Cast Down The Heretic’, and many more. The common appeal of these tunes are (partially) the – for Nile standards – catchy chants at the end of the song. Add dazzling riffs and guitar lines to this particular song and there you have it.

All in all, What Should Not Be Unearthed is a typical Nile album. However, saying that the Americans pulled a formulaic trick with this album is selling them short. The more trained (Nile) listener will be able to distinguish from the other work and will revel in its crushing glory.

Rating: 7,5/10
Track list:
1. Call To Destruction
2. Negating The Abominable Coils Of Apep
3. Liber Stellae Rubeae
4. In The Name Of Amun
5. What Should Not Be Unearthed
6. Evil To Cast Out Evil
7. Age Of Famine
8. Ushabti Reanimator
9. Rape Of The Black Earth
10. To Walk Forth From Flames Unscathed