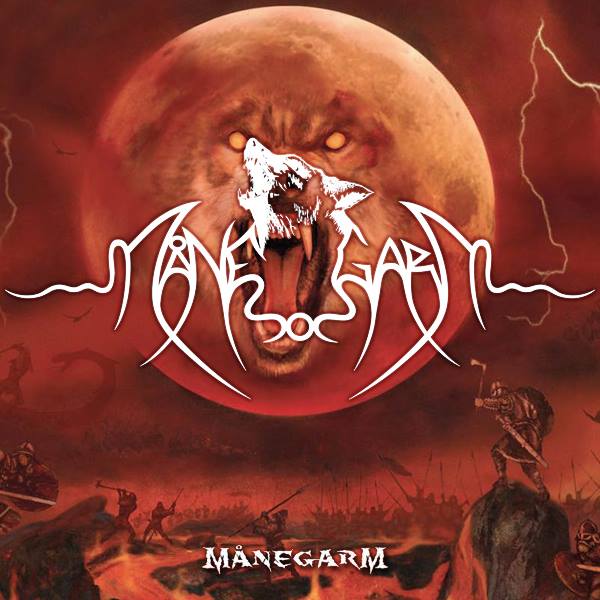 By: Thomas
Welcome to Viking Metal 101 featuring Månegarm with their latest self-titled release! So what ingredients do we need to make a true Viking Metal album besides Odin’s blessings? The Swedes apparently have decided to show us.

Månegarm are one of the bands that helped to shape the viking metal genre in the mid-nineties. Their combination of raw black metal and folk melodies created an epic sound that has influenced many contemporary viking/pagan metal bands. In their 2013 release “Legions of the North”, the band abandoned their trademark sound and replaced it with a rather diffuse and uninspired viking/melodic death metal cocktail. Two years after what seemed like the start of an artistic midlife crisis the current album was released. The style of the new album “Månegarm” has shifted towards a more traditional Viking Metal approach. The berserk mode of their earlier releases has been switched off pretty much with this disc, barring the way for a melodic mid-tempo sound.

This album presents itself almost as a manual for creating melodic Viking Metal. Take some male choirs, gentle female voices, a catchy tune here and there, some groovy mid-tempo riffs, the occasional flute and violin, and voilà, you have an epic masterpiece? Nope, not this time. Nothing really works here, unfortunately. It seems that all the mentioned elements were just glued together for this album, and when such an formulaic sequence achieved a length of 4-6 minutes, they decided to call it a song. The whole album meanders along without much intensity. It never bothers, it’s like elevator music for the Viking Age. The production is very good, almost too good, bordering at the edge of a sterile sound, which does not really help with creating the epic atmosphere that many consider a must for a good Viking Metal album.

Månegarm of 2015 sounds like a Best-of collection of sound bits from the major players in the field, such as (fill in your three favorite Viking Metal bands here). This produces an incredible amount of deja-vu moments when listening to the album for people who are fans of the genre. It is certainly okay to draw inspiration from other bands, but not so much as to make up almost 100% of the album.

A few of the melodies are really good, and stuck with me for quite some time. But a few catchy tunes are not enough for this album to be recognized as a significant contribution to the genre, especially at a time where the Viking Metal genre is in urgent need of fresh ideas. So let’s hope that Månegarm are getting over their current identity crisis soon, and improve with the next album. Their older output certainly shows that these folks are capable of much more!