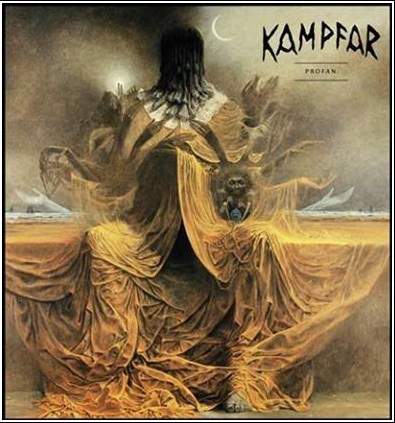 Not even two years have passed since the release of Kampfar’s previous album ‘Djevelmakt’ and now they already come forth with a new release: Profan.
It seems like the band is a nice flow the last years. They are releasing albums and playing an amount of live shows like never before.

The band divides their own history into three chapters (so far). Where in the first chapter folk elements, mainly inspired by former guitar player Thomas, still played a big role in Kampfar their music, now in the third chapter the band has evolved towards a much more darker sound. The difference between the older works and Profan became even more clear after visiting a special old school show of Kampfar about two weeks ago.

The sound of Profan is extremely similar to the sound of Djevelmakt, and gets close to being a bit more rawer clone of Djevelmakt. Still there are also hints to the older times of Kampfar when it comes to the melodies and guitar parts.

Right from the start with Gloria Ablaze we get dragged into the depths with Kampfar their typical own sound. Slamming drums, that get even more intense when the blast beats set in, raging guitars, and Dolk his raw and piercing vocals get you into that ultimate Black Metal mood.
The last years we also hear more and more vocals from drummer Ask. His presence is mainly hearable in the deep, slower and probably best song of the album: Daimon.
Where the first songs of the album were all quite up tempo, with the guitars on fire, especially during the almost bombastic Skavank; Daimon is creepy, dark and the harrowing vocals drag you to a dark place.
With Pole In The Ground, the tempo goes up again. This is a great headbanging song and will certainly do good when played live on stage.

Kampfar definitely stayed true to themselves but also don’t linger in the past, and Profan is their proof. The album is a logical continuation of Mare and Djevelmakt and truly completes this triology. The sound is dark and raw, and even though it took me several turns to start appreciating this album being an album on its own, I’ve grown to extremely love it.