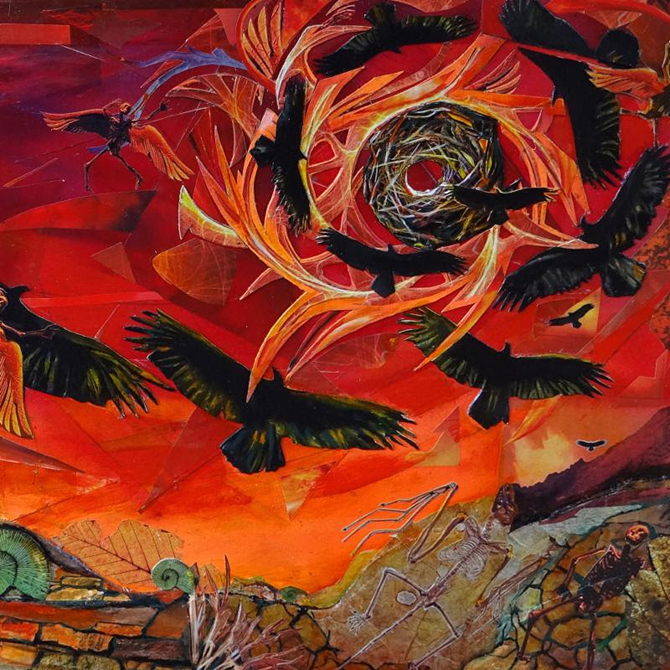 By Laetitia
I got acquainted with the American progressive/post-metal band Intronaut in 2013, with the release of their dense and atmospheric record Habitual Levitations (Instilling Words with Tones). While their layered soundscapes proved to be challenging to digest, the album turned out to be quite memorable. So when Intronaut’s latest effort, The Direction of Last Things, ended upon my desk, I was happy to take it, yet not prepared for what was to come..

As with Habitual Levitations, it took some time to get used to this album. Even more in comparison to the previous record, Intronaut pumped up the aggressiveness on this record, but also the complexity. While the instrumental parts on the previous effort felt more like sludy, atmospheric pieces infused with jazz, they have now transformed into full-fledged jazz jams in some of the tracks. The alternation between clean vocals and harsh vocals is pushed to the front, which gives the impression that you are listening to a metal jazz core band. The opening track, ‘Fast Worms’ is a combination of these elements. Easy listening? Not really.

‘Digital Gerrymandering’ throws you back in the style of Habitual Levitations. It’s extremely heavy on the stomach and the breakdowns and polyrhythms seem to make a lot more sense against a backdrop like this. What really shines through in this song is the clear and polished production, done by no one else than Devin Townsend.

Honestly, the first spins of The Direction of Last Things left me hanging and I couldn’t really grasp the music. However, while listening to songs such as ‘Digital Gerrymandering’ and ‘The Pleasant Surprise’ which are much more to my taste in music and the difficulties I had with this record slowly faded away. Tracks like ‘Fast Worms’ and ‘The Unlikely Event of A Water Landing’ are still a tough cookie (although the latter is a truly mesmerizing, technical piece).

It will take some more listening sessions for me to fully appreciate this record and there is a chance I won’t appreciate it as much as Habitual Levitations, if only for the reason that this record is a bit more accessible. Yet once you’ve waded through the – sometimes uncomfortable – complexity, you will recognize the excellent musicianship of Intronaut and it will push your musical boundaries, for the better.