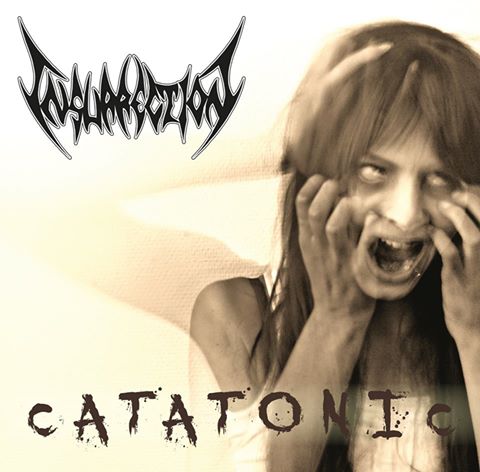 By Wouter
Insurrection is a melodic death metal band from the Netherlands, influenced by bands such as At The Gates, Carcass and Death. They’ve been actively doing shows in the northern parts of the Netherlands since they were formed in 2010. The writing process started right there in the beginning, but now, after a few years, their debut Catatonic is ready. This six song strong cd unleashes almost half an hour of good quality metal.

Insurrection delivers a type of melodic death with thrashy riffs on their debut. Those pounding rhythms evolve into blasts and then smoothly flows into guitar harmonies and melancholic melodies. The grunts and shrieks of the vocalist fit in perfectly with their variety of styles within their songs. They are powerful, aggressive and comprehensible. As a whole, the songs are not just tied together with a bunch of riffs though. They sound like they belong together which means it is well written. Also, the production is really tight which makes it all sound like a professional effort.

Catatonic is a strong melodic death metal debut. The album possesses many different rhythms from pounding thrashy riffs to doomy dark melodies. The riffs fit together and the vocalist produces powerful grunts and shrieks to go with these riffs. The variations in rhythms and styles makes the songs stay strong on their own and fresh as well. The music is well structured and well produced too. This results in a great modern melodic death metal debut for Insurrection.