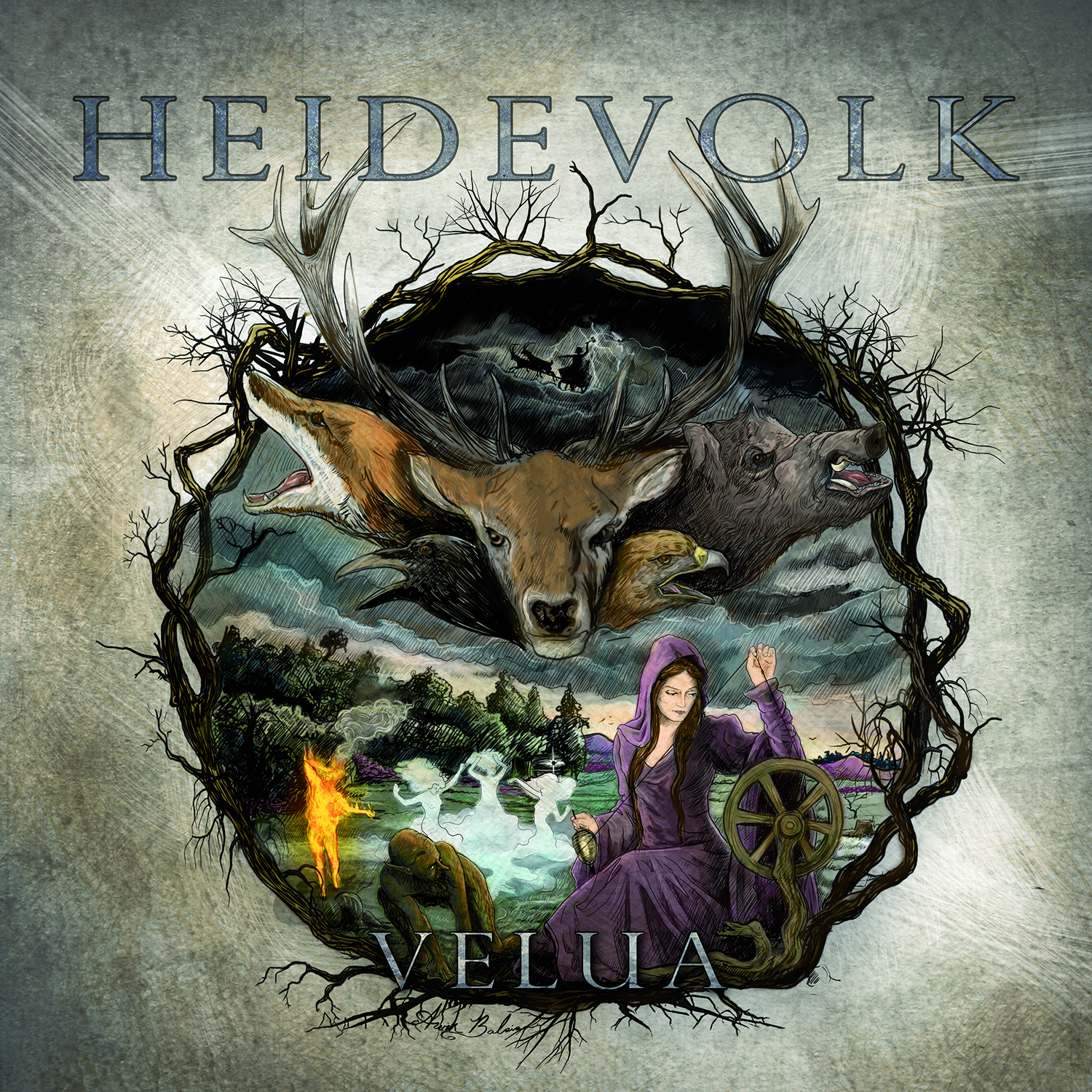 So, here I am, enjoying my day off, listening to the new album ‘Velua’ of my hometown band Heidevolk, wondering how the hell I’m going to review this.

This because, first of all, I find it pretty hard to stay objective when it comes to Heidevolk and I will probably score a new album 10/10 without even listening to out, just to support them. Second, after spending an entire day with the band in the studio back in November (about which you can read more over here), and hearing quite some material already, I was able to sing along quiet some lines before hearing the album as a whole for the first time. So I’m not exactly a ‘blank page’ anymore when it comes to Velua.

When writing this, my eyes spot the book I’m currently reading and that’s laying on the table in front of me. The book is written a bit over a century ago by Gust van de Wall Perné, and is called ‘Veluwsche Sagen’. It’s a collection of Sagas about the Veluwe, a ‘national park’ here in Gelderland; or as Wikipedia says:

The Veluwe is a forest-rich ridge of hills (1100 km²) in the province of Gelderland in the Netherlands. The Veluwe features many different landscapes, including woodland, heath, some small lakes and Europe’s largest sand drifts.

By now, it shouldn’t be a surprise to you anymore that this book has been a big inspiration for the songs on Velua; except for the last, and Heidevolk’s first English, song ‘Vinland’, which is a dedication to their time in the USA. Now I could guide you through this album track by track, explaining all the sagas, but then by the end of it I probably would have written an entire book myself, so let’s focus on the general feeling of Velua. If you really want to know more about all these sagas, I can strongly recommend you to go learn Dutch, then buy the book, and still struggle to understand it because our language has quite evolved the last century.

First of all I have to say that our language isn’t the only thing that has quite evolved lately, the band definitely has evolved as well! Velua isn’t a new Uit Oude Grond or Batavi, but it is so much more. The band truly shows what they’re capable of on this album and it seems they have given even more of themselves than before. Of course the main focus of Velua lies on the chants, the double singing and duets between Lars (for who Velua is his first Heidevolk recording) and Mark. This is what gives Heidevolk somewhat of their unique sound. But also the bombastic sound made by the raging guitars, with great solos and up tempo drumming is what marks this album. The album is filled with powerfull, more aggresive songs like the already released song ‘Winter Woede’, ‘Herboren In Vlammen’ and ‘Één Met De Storm’.

But also the beautiful more chanting songs that tell you stories about times long forgotten and leave you wandering in those days, such as Urth, De Hallen Van Mijn Vaderen, and Richting De Wievenbelter, are highly prominent on Velua. These chants can’t be praised without mentioning the beautiful lines by the string ensemble they are accompanied by though.

Songs as Het Dwalende Licht and Velua are songs that awesomely combine all of the previous mentioned aspects. The power in these songs is great, but there is also space for some calmer storytelling. The guitar solos are great; the fast, with raging blast beats, drumming give the songs lots of power and the strings who truly shine in these songs, give it a great final touch. Like I said: the band has quite evolved, but don’t expect an entire new Heidevolk. A song like ‘Drankgelag’ for example could easily fit on one of the previous albums.

Now all that’s left to say is that this album is a true masterpiece by Heidevolk, the band shows a 100% what they’re capable of and they are outshining themselves. Even you none ‘pagan metal lovers’ should give it a spin! I’m a bit afraid to rate this album 10/10 because of what I wrote at the beginning of the review, therefor I’ll rate it 99/100 ;)