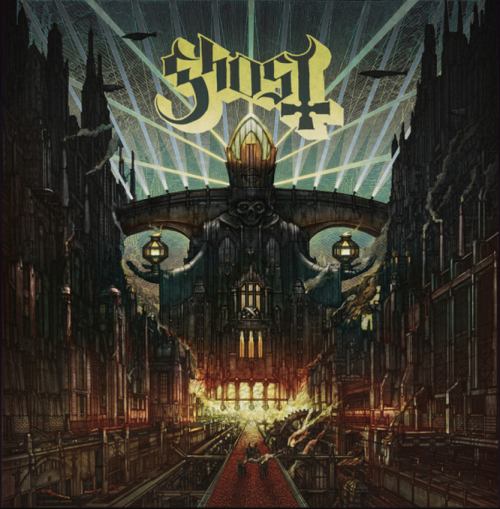 Swedens most famous occult rock band Ghost are back with their third offering Meliora. The band has ‘departed’ with former front man Papa Emeritus II, who is succeeded by his three month younger brother Papa Emeritus III, or, as we like the refer to him in the Netherlands: Sinterklaas (Google is your friend).

While listening to the album the first time, it appears that the overall vibe is somewhat lightier and poppier than before. Of course the music is heavily inspired by seventies rock, so to compare it to metal bands would be unjust. Still, the records of Ghost have had metal aesthetics and on Meloria that influence has lessened.

Meliora is an album with a couple of well-crafted tunes. The groovy single Cirice comes to mind. The ballad like He Is is the absolute gem of this record. The beautiful lyrics in combination with the guitar work (the acoustic intro and the solo, for example) make it incredible song. After listening to the catchy Deus In Absentia, a song that combines all elements of Ghost, you’ll find yourself singing the phrase ‘the world is on fire’.

The album lacks a real kick-ass heavy song. Mummy Dust is an attempt but it terribly repetative and the whispering vocals are quite generic. Most songs on the record are decent and have the classical Ghost sound. All in all, Meliora is an okay and enjoyable album, but nothing more than that. Especially compared to the level that Ghost has set for themselves on the previous two records.