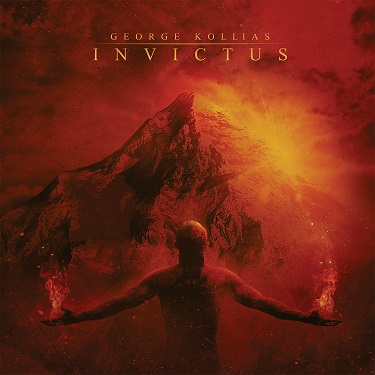 By Laetitia
When the Greek God of blast beats George Kollias (Nile) was asked by fans to record a solo album, he decided to give it a go. The result of this endeavour is Invictus, an album with eleven songs, written and performed by Mr. Kollias himself. So naturally, you can hear mind blowing drums on Invictus and they are without a doubt the most dominant and laudable aspect of this record, but what else?

The music on Invictus falls in line with that of Nile (although less technical) and Behemoth (from time to time there is too much similarity there). George Kollias also uses a somewhat Middle Eastern influence as a soundscape for Invictus. Now, sticking to a formula that you know as a musician is understandable, but it could also end up – as it did in this case – in an album that lacks a distinctive sound. What one also notices is that the guitar riffs are quite repetitive on this effort, with the exception of a few impressive solo’s here and there.

This is not to say that Invictus is not an enjoyable album. The song Shall Rise/Shall Be Dead for example, consists of heart pumping breakdowns and a sense of havoc that would make any fan of the genre drool. The most noticeable track is the instrumental Apocalypse, due to its calm, movie soundtrack like approach and synths that appear out of place on this effort. The last song Buried Under the Flames, starts with an intriguing monastic Greek chant, something that would could have been incorporated further on Invictus. All in all, Invictus is not as much of a masterpiece as yours truly expected. Nevertheless, it is still thoroughly enjoyable for fans of the genre.