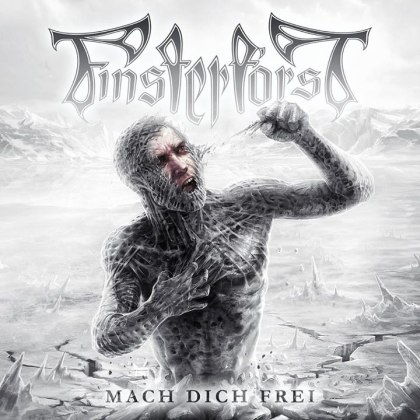 A little over two years ago, I had the distinct privilege of reviewing Finsterforst’s third full-length album, “Rastlos.” I felt compelled to preface that review by saying that I’ve been a huge fan of this atmospheric folk metal band since the first time I saw them perform live in 2011. They are an addiction and an obsession for me; I’ve often had their discography on repeat at home for months at a time. However, as I mentioned in that last review, that level of fandom can often lead to unhealthily high expectations regarding any upcoming release – and, consequently, equally severe disappointment if those expectations aren’t met. Luckily for me, “Rastlos” was an absolute masterpiece, a world of aural bliss that I was always reluctant to leave when the last notes of the final song sounded in my headphones. I’d usually press play and start all over again. I had never expected Finsterforst to top the majestic experience of their sophomore work, “…zum Tode hin,” but everything about “Rastlos” was more polished, more expansive, and more engaging than I ever though possible. I knew that I would have the opportunity to review the band’s fourth full-length album, “Mach Dich Frei,” several weeks in advance of the release; I was understandably excited, and I sat down with the album as soon as I got it, ready to dive in.

So perhaps, dear reader, you are wondering why this review is being published so long after the release date. I’ve had the album at home for over a month now. I’ve listened to it on loop. I’ve taken a break and listened to it again. And again. And again. And the truth is, for the first time in my nigh-on four years as a dedicated Finsterforst fan, this album just doesn’t resonate with me. Does it feature the same style of driving guitar riffs and lilting flute and accordion melodies as past albums? Yes. Heavy synthesizers to create dramatic atmosphere? Definitely. Fierce, brutal growls and resonant male vocal harmonies? Check. All the classic Finsterforst elements are there. So why don’t I love this album by one of my favorite bands in the whole world?!

Well, part of the problem is, of course, my unrealistic expectations – as I said, they’re always a double-edged sword. If this fourth album had merely been a carbon copy of “Rastlos,” my rose-colored fan glasses might have allowed me to overlook the possibility that the band was stagnating; I would’ve given the album an overwhelmingly positive review for allowing me to recreate that listening experience. But despite its familiar elements, “Mach Dich Frei” does not continue down the same misty, sun-dappled forest path that past Finsterforst albums have trodden. I would go so far as to say that it represents a fundamental shift in the Finsterforst formula – toward something louder, brasher, and altogether more macho. And I’m just not sure that’s for me.

Let me start with the aspects of the album I like. First off, the first and last full songs on the album, Schicksals End’, and Finsterforst, are like the solid bookends of “Mach Dich Frei.” They’re a bit fiercer than the band’s usual fare, but melodically, they are reminiscent of some of the more powerful older works – and that’s lucky, because at nearly 24 minutes in length, the song Finsterforst comprises over a third of the whole album. Additionally, popping up at various points throughout “Mach Dich Frei” are vaguely Middle Eastern-sounding melodies; it felt like the band was making a concerted effort to expand its musical horizons here, and I personally think it’s a really nice touch. The instrumental interludes, Im Auge des Sturms and Reise zum…, are both excellent as well; the former sounds quite typical for Finsterforst, while the latter struck me as somewhat more experimental, but in a way that really appeals to me as a fan of the band’s older work – the interplay between the flute and the accordion here is stunning. And of course, Olli and Johannes both do a fantastic job on solo vocals.

Unfortunately, that’s about where it ends for me. There are some pretty pervasive issues with this album – the most problematic one being the synthesizers. On past Finsterforst albums, the synths have been the mossy carpet of the forest floor, creating a subtle foundation where the music can slowly grow. On “Mach Dich Frei,” however, they’re a herd of trumpeting elephants, trampling everything in their path. They’re frequently jarring and at times completely overblown; there are moments when they throw otherwise decent songs totally off balance, including some of the tracks mentioned above. Also, while songs upwards of eight minutes in length have always been one of Finsterforst’s great strengths, I actually found myself losing interest during some of the longer tracks on this album – Mann gegen Mensch, in particular. That has never happened before.

I think the issue here is that so much of “Mach Dich Frei” is just naked aggression; for the most part, the album lacks the kind of slow buildup of powerful layers within songs that can be found on past works, and the lyrics are so focused on rage and rebellion that they feel a bit adolescent compared to the eloquent expression of longing, loss, and desolation that was “Rastlos.” When you combine those factors – the martial lyrics, the constant hammering of those elephant synths, and the length of the songs – you run the risk of descending into tedium, which unfortunately happens at more than one point on this album. There are also a number of elements on “Mach Dich Frei” that feel like an experiment for experiment’s sake. For instance, as much as I really admire Sevan Kirder – both for his work with Eluveitie and his whistle playing on past Finsterforst albums – his voice feels like an odd fit here. The same holds true for the rapping on Zeit für Hass; it just seems a bit out of place. And, well…I’m not sure if I’ll ever recover from hearing Finsterforst reference Helene Fischer in their lyrics! (OK, OK, ein bisschen Humor muss schon sein).

On the whole, for me, everything about this album is just too much: too much synth, too much aggression, too much volume in every sense. I feel like Finsterforst is capable of greater subtlety; even the strongest songs on this album don’t quite live up to anything on “Rastlos” in that regard. That all being said, though, “Mach Dich Frei” is not without its appeal. It has a kind of testosterone-drenched power to it; it’s brutal, direct, and defiant. A couple of the songs are even unexpectedly catchy in a way that past Finsterforst songs haven’t been, and having seen those songs performed live just once, I can already tell that they’re going to be definite crowd-pleasers. “Mach Dich Frei” may not rank among my personal favorites in Finsterforst’s discography, but it’s sure to win the band a lot of new fans.